Surbhi Chandna and Sharad Malhotra, who mesmerised everyone with their steamy chemistry in Naagin 5, have taken to their respective Instagram stories to share an update with their fans hinting at something special.

It has barely been a month and fans are already dying to see a romanctic reunion between Naagin 5's hot jodi of Bani and Veer aka Surbhi Chandna and Sharad Malhotra. Their electrifying chemistry in Ekta Kapoor's supernatural show was loved by the audience. Surbhi and Sharad had left their fans jaw-dropped with their steamy love making scene which had gone viral on social media. And while fans are missing them after the end of Naagin 5, Surbhi and Sharad are going to romance once again in this surprise project. Also Read - Kuch Toh Hai - Naagin Ek Naye Rang Mein, 13th February, written update: Priya wants to teach Rehan a lesson for misbehaving with girls

Surbhi and Sharad have taken to their respective Instagram stories to share an update with their fans hinting at something special. The two were seen getting their make-up and hair styling done. Accoring to the reports, Surbhi and Sharad will be shooting for a romantic music video which will be out soon. Also Read - Naagin 5: 'Marry a guy who holds a woman like Veeranshu (Sharad Malhotra) holds his Bani,' says Surbhi Chandna 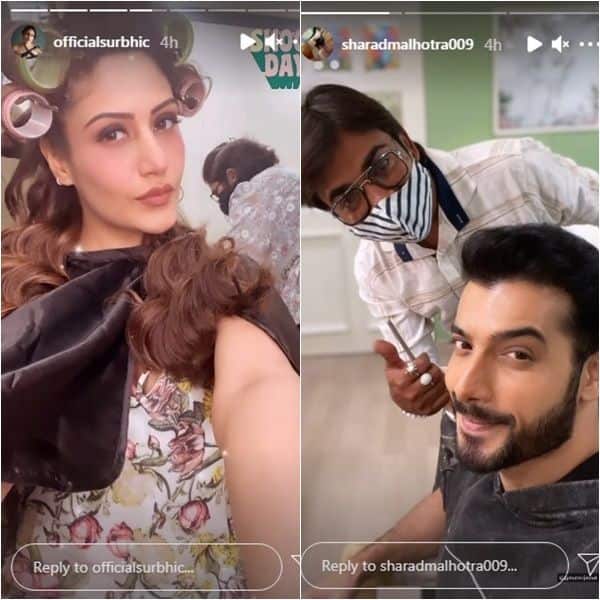 It wouldn't be wrong to say that Surbhi and Sharad's steamy chemistry in Naagin 5 was one of the major highlights of the supernatural show. Besides the sets, Surbhi and Sharad also share a great camaraderie with each other when the lights and cameras are shut. They also indulge in cute banters on social media and keep treating them with their loved-up pictures.

Talking about shooting romantic scenes with Sharad in Naagin 5, Surbhi had told TOI, "I feel when two good-looking people are cast in a show, sparks fly on screen. Sharad is a good-looking actor, I am also decent looking (laughs) Veeranshu was the badass guy in the beginning and Bani is the righteous one, so that helped the chemistry shine. We had many romantic scenes but our director Ranjan Kumar Singh and the entire team is so technically sound, that even if we were apprehensive, it was all good after we finished the scene. We used to complete a romantic scene and break into laughter, so it was fun. Besides Sharad is a great buddy, so it was fun working with him and Mohit Sehgal was also a great co-actor."

Naagin 5 has been replaced by its spin-off show, Kuch Toh Hai - Naagin Ek Naye Rang Mein. It stars Harsh Rajput and Krishna Mukherjee in the lead roles. While Harsh plays the role of Bani and Veer's son, Rehan, a hybrid of Naagin and Cheel while Krishna plays the role of Priya who is an angel. The two are romantically involved on the show.