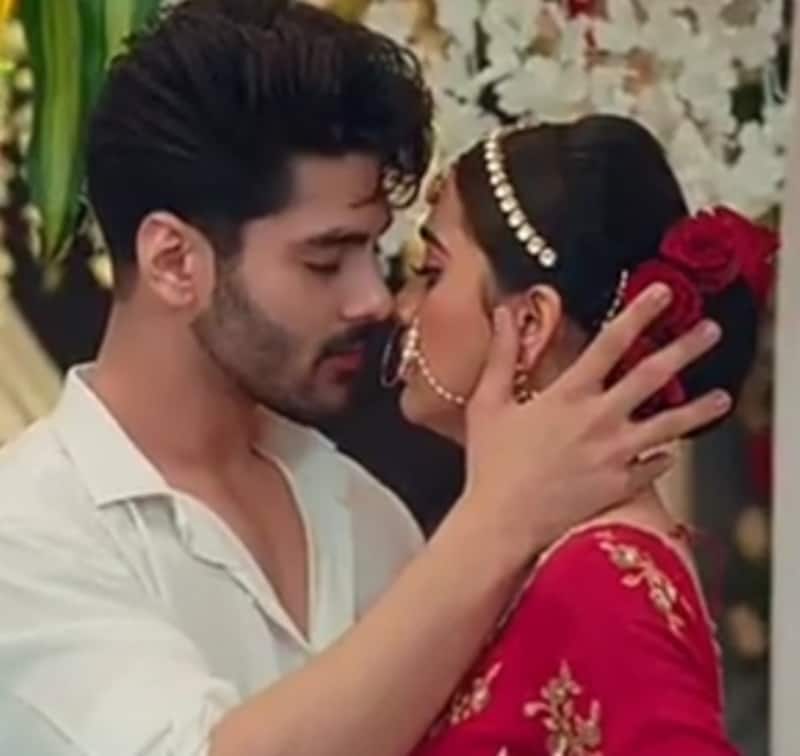 Naagin 6 starts with the mandap catching fire. His brothers rescue him. He says I will marry Pratha (Tejasswi Prakash) at all costs, and expose her. He says our fathers are missing and Pratha is responsible. Pratha is in the room when old Shesh Naagin (Maheck Chahal) comes. She says that I am scared now. Pratha says I would have managed Ritesh but Rishabh is difficult. What will happen if he tries to touch me? Shesh Naagin says you will manage only do not let Rishabh find your identity. Rishabh enters the room and Shesh Naagin hypnotizes him. When gets up, he gets romantic with Pratha. He notices her wound and asks her what is the matter? He says you came to the room straight after the nuptials, and how come you are hurt. Pratha says I am doubtful if he loves me or not. She says I will have to stay away. Rishabh asks her if she has taken his father to the jungle to kill him. Also Read - Bigg Boss OTT: Not Karan Kundrra or Tejasswi Prakash, this TV diva to replace Karan Johar as host?

Pratha says I was at home. She says I only went to the temple for Mahashivratri. Rishabh teases her about their wedding night. He says I will make it special for us. Pratha says she needs to escape. Prathha takes her Naagin form and adds the Nidra vish (sleep poison) in the milk. She realizes that she cannot revert to her human form as it is a special night of Chaturdashi. She sees all the scales. Shesh Naagin (Maheck Chahal) wonders where is Lalit. She looks at the pit. Rishabh says she ruined Ritesh’s marriage with Ria. Pratha is in Naagin form. Rishabh walks in but does not notice her. He throws away the picture with his fiancée. Also Read - Trending TV News Today: Urfi Javed shares pic of bruised neck, TMKOC's Mandar Chandwadkar aka Bhide talks about Raj Anadkat aka Tapu's exit and more

Rishabh tells Pratha that he has fallen in true love. He says I offered you money to break your marriage with my brother. He asks her why is she shivering in fright. He says I am your husband. Rishabh says I fought my brother for you. He wanted to marry you badly. Rishabh tells Pratha that she will not find a lover like him. He moves forward to kiss her. She offers the laced milk. He says I do not like milk. Rishabh tells her to drink the milk first. She says no. Rishabh says if you do not drink I will be confident that you have spiked it. The Nidra vish also works on Naagin. After having a few sips, she starts seeing multiple Rishabhs. Pratha makes him drink the milk. Both of them are senseless. Also Read - TRP Report Week 25: Anupamaa TRUMPS; Naagin 6, Kundali Bhagya maintain positions; Ghum Hai Kisikey Pyaar Meiin dips further [Top 5 TV shows]

Rishabh asks Pratha if she is happy with the marriage. He says I did not wish to marry you, I loved someone else. He starts crying. Pratha hugs him. Intoxicated Pratha and Rishabh dance to Humma Humaa. Pratha wakes up in his arms. Her necklace is stuck in his shirt. Maheck Didi (Maheck Chahal) comes to the room. Finally, she disentangles the necklace. Pratha spots her shedded snake skin and hides it in the cupboard. Their sister-in-law comes and tells them to get ready for Mooh Dikhaai rasam. Seema is worried about her husband, Lalit, going to the jungle. Rishabh tells Seema that he told the cops to hunt for Lalit. Maheck wonders where is Lalit.

Pratha comes down for the function. Rimi, his fiancée comes there and says she will shoot herself dead. She says I will die without Rishabh. Pratha says I will save her somehow. She freezes everyone. Pratha as Shesh Naagin removes the bullets. When the spell ends, Rimi shoots herself but the bullets are missing. Her mom, Urvashi and sister take her away from there. Daadi says we need to do aarti as many bad things are happening. Rishabh leaves to meet the Inspector Nand Kishore. Seema worries that he will know the secret. Maheck and Pratha says Rishabh is trying very hard to find his dad. They say we need to find him first. Daadi tells Pratha to come for her first Rasoi.

The Inspector begins his search for Lalit. Even the two Naagins are hunting in the jungle. Inspector says Lalit Gujral looks in deep trouble. The police sniffer dog is put on the hunt. Pratha sees Rishabh – Inspector looking for him. Pratha prays to Lord Shiva to give her guidance. She gets a hint and marches ahead. There she finds Lalit Gujral and kills him by throwing him in a quicksand puddle. She feels it is ok as he is a traitor. The dog and police team reaches here. They say that he might have died. Rishabh dives into the quicksand to get him. Pratha sees this and feels bad. Rishabh comes out with a body.