Nach Baliye 9: Wild card contestants Pooja Banerjee and husband Sandeep Sejwal to quit the show. The two had given their first performance last week on Sunday

Nach Baliye 9 has been in the news for eliminations, injuries, ex-couples fighting, arguments with the judges and other controversies. The show has been nothing less than the controversial show Bigg Boss. We have seen a whole lot of drama his season and another one in the list is Pooja Banerjee and husband Sandeep Sejwal's exit from the show. Also Read - Splitsvilla 14's host Rannvijay Singha shares first glimpse of his son on Instagram – view pics

Pooja Banerjee and Sandeep Sejwal had just entered the show as the wild card contestants and had received 80 percent marks from the judges for their first performance. As per India Forums, the two won’t be able to perform this week as Pooja is injured. In an interview with Times Of India, Sandeep Sejwal spoke about Pooja's injury. He said,” In the act, Pooja had to stand on my shoulders and fall back, with our choreographer catching her. However, she slipped, lost her balance and fell in the front from above 10 feet from the ground. She landed on her hands. The impact was such that she hurt both her hands — the joint of her right wrist is fractured, while the left elbow bone is chipped. Pooja has also sprained a ligament in her left leg. She is in a cast and the doctors are waiting for the swelling to subside before they perform the surgery, which is scheduled to take place today. She will be hospitalized for at least a week.” He adds, “Since the show is about couples, I don’t think we will be able to continue. So, we are opting out.” Also Read - Naagin 6: As we eagerly wait for the show, here's a quick NAAGIN QUIZ for all Naaglok fans 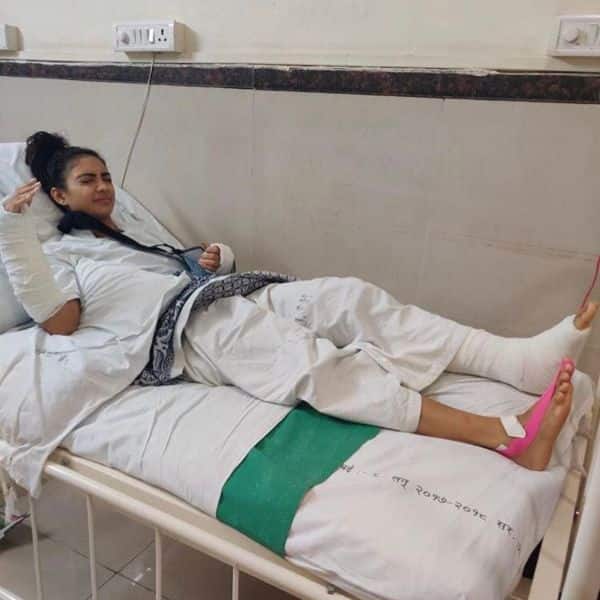 Also Read - From Anita Hassanandani to Divyanka Tripathi: 5 TV actresses who own a steal-worthy saree collection

Fans surely did not wish Pooja Banerjee and Sandeep Sejwal to end it so soon. Nach Baliye 9 has seen many injuries this year. Faisal Khan got injured while shooting for Chandragupta Maurya and had to undergo a surgery. The doctors had advised him to go for a bed rest for a few weeks which made him and Muskaan quit the show. The two had been performing well and had received the most number of Hi-5s on the show. Nityami Shirke too was injured but managed to give spectacular performance even with her injured leg.