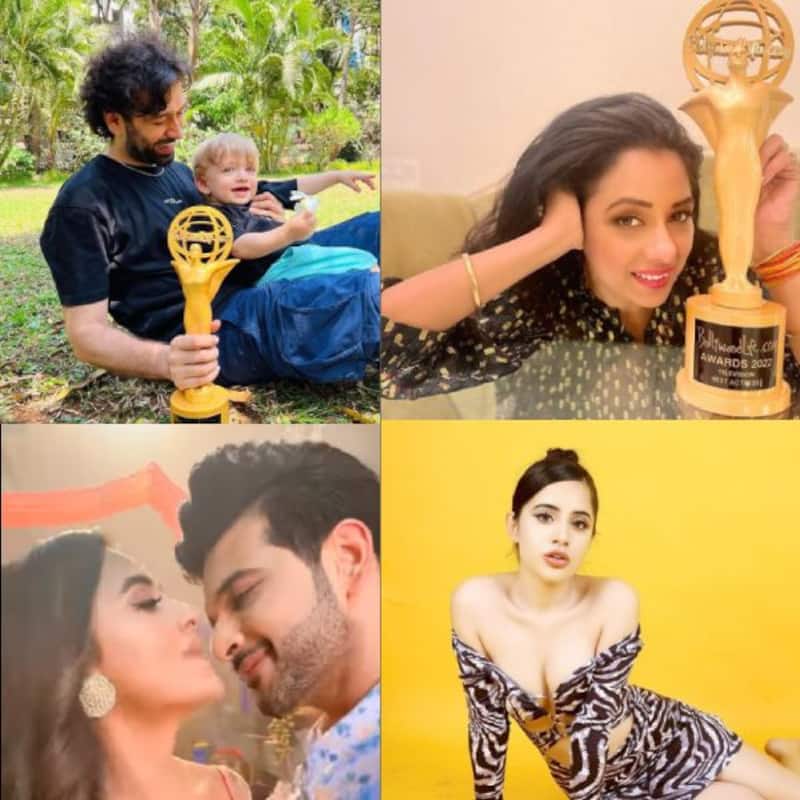 Hola! It is time to glance through the nicest and some not-so-nicest pictures of TV celebrities that went viral on social media over the week. Among the biggest names that kept Instagram buzzing are Bade Acche Lagte Hain star Nakuul Mehta, Anupamaa star Rupali Ganguly, Gauahar Khan, Urfi Javed, and more. Bigg Boss 15 winner and Naagin 6 star Tejasswi Prakash and her boyfriend Karan Kundrra too ruled Instagram over the week. Scroll on to see the best pictures and videos of the week gone by. Also Read - SSMB28: Mahesh Babu, Trivikram film shoot to again get delayed for THIS reason; will it affect the release date? Here's what we know

In the recently concluded BollywoodLife Awards, Bade Acche Lagte Hain star Nakuul Mehta won in the category of Best Actor TV. Showcasing his trophy, the actor striked a very cute pose with his son Sufi. The picture went viral on social media in no time. Also Read - Bigg Boss 16: Nimrit Kaur Ahluwalia gets a stern warning from Bigg Boss as she becomes the first captain; other contestants left super shocked

Television industry's most talked couple, Tejasswi Prakash and Karan Kundrra are keeping their fans entertained with their constant PDA filled social media updates. Recently, Tejasswi had shared a video on Instagram which had her singing 'Bitches come and go brah, But you know I stay'. Also Read - Vikram Vedha OTT release: Hrithik Roshan, Saif Ali Khan film cracks deal with THIS digital platform, set to release on THIS date?

Anupamaa star Rupali Ganguly won in the Best Actress (Television) category at BollywoodLife Awards 2022. She took to her Instagram to share some stunning pictures whilst flaunting her trophy.

We all know that Urfi Javed loves to slip into some unusual fashion pieces. She even gets trolled for the same. Recently, Sussanne Khan's sister Farah Ali Khan made a comment stating that Urfi should be reprimanded for making such fashion choices. In return, Urfi slammed her in several posts. She also shared a video calling her a 'bitchy aunty'.

Did you enjoy all these pictures? Stay tuned to BollywoodLife for much more.