OH MY GOD! Sidharth Shukla BRUTALLY TROLLED for his post on the Taliban crisis in Afghanistan

Along with a disheartened picture of himself, Sidharth Shukla took to his official Instagram handle and posted a heartfelt caption, expressing concern over the peril facing Afghanistan and displaying solidarity

The Taliban insurgency in Afghanistan has reached ghastly proportions, with the terrorist outfit having taken over all key areas of the country, having displaced the government, so much so that the President had to flee with his family, fearing for their lives, and the many of the indigenous populations are waiting in dread, recollecting the worst times of their lives during the previous Taliban regime in the country. In such a scenario, many are expressing their concerns over the peril facing Afghanistan and displaying solidarity with its people on social media, which is, frankly, all that we can do at this point, with Bigg Boss 13 winner Sidharth Shukla also being one of those to show his support for the people of Afghanistan. Also Read - Bigg Boss OTT: Neha Bhasin reveals she would have dated Pratik Sehajpal if she was not married; says 'Kha jati isko main'

Along with a disheartened picture of himself, Sidharth Shukla took to his official Instagram handle and posted a heartfelt caption that read: “Feeling sorry for the state Afghanistan is in…. Does humanity still exist…!!!!” Check it out below: Also Read - Bigg Boss 15: Mohsin Khan, Tina Dutta, Manav Gohil – 15 Celebs fans may get to see in Salman Khan's show

However, no sooner than he shared his post that the top TV star was brutally trolled, with brickbats arriving in all forms and across all quarters. A popular meme page on Instagram shared Sidharth's picture with another caption that read: “Ye kaunsa tareeka hua afsos jataane ka,” while other netizens took to his comments section to write messages like, “50rs kaat overacting ka,” “Bolna kya h 50₹ kaat saale ka,” and “Siddharth chutkula,” while still some others even got verbally abusive. Here's a glimpse of the trolling he faced... Also Read - Bigg Boss OTT: Shamita Shetty and Raqesh Bapat REVEAL their current 'relationship status'; the latter gives a sarcastic reply 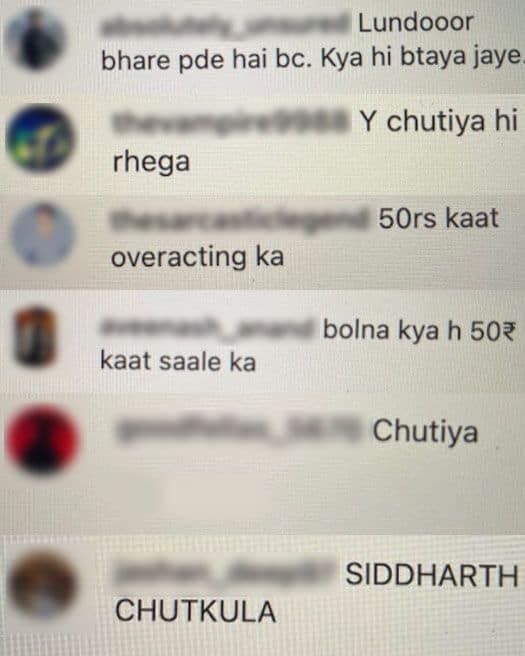 We wonder what could be the reason for such aggressive trolling against the actor. Does a vast majority in India actually not feel the pain and plight of Afghanis at the moment or is it just because of the Sid's pic that accompanied his caption, which, even we'll admit, borders on the side of excess?