Ramayan 16 April 2020 Morning episode written update: In today's episode Hanuman brings the Sanjeevani medicial plant's mountain so that Vaidya saves Laxman's life and again sets out to have war against Meghnath. Meghnath decides to do a Holy yagya in order to be more powerful but Vibhishan helps Laxman to disturb the Yagya 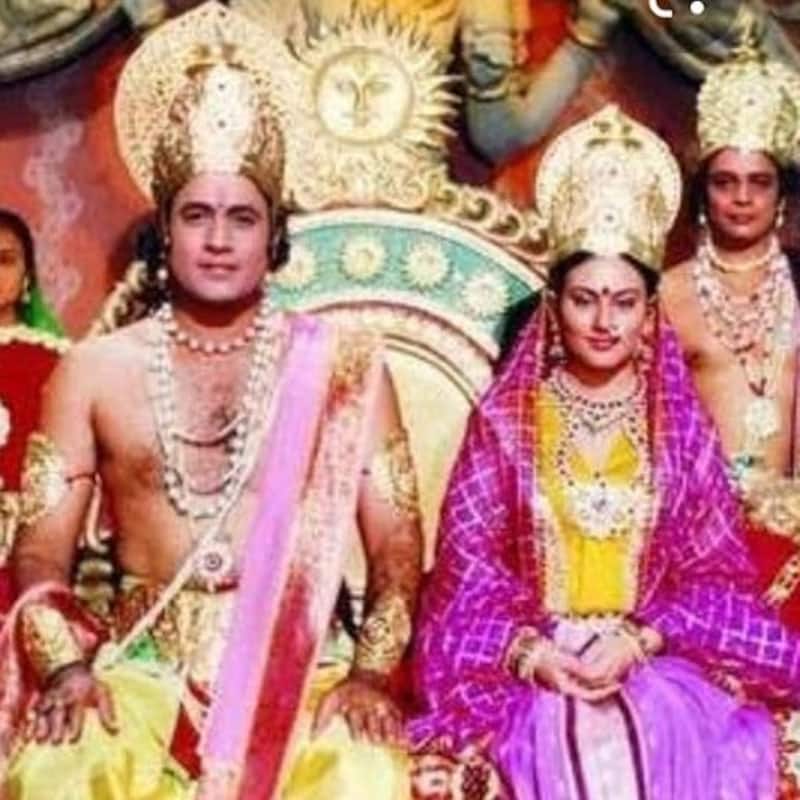 In today’s episode Hanuman enters the sea as per Kalnemi’s plan to take bath. But there comes another danger as a Crocodile attacks him. But Hanuman succeeds in killing the crocodile. A Dev Kanya appears from the Crocodile’e body as she was cursed by a saint. She alerts Hanuman about Kalnemi’s elusive powers. Hanuman gets very furious and decides to end up Kalnemi. He goes to the place where Kalnemi is disguising as saint. They have a tough fight. Hanuman eventually kills Kalnemi brutally. He then leaves ahead and reaches to the mountain. He first seeks permission from the God who look after the medicinal plants and luckily he gets the permission. But he cannot identify the medicinal plant that Vaidya had told him. So he decides to lift up the entire mountain and take it to the beach side to save Laxman. Bharat’s army men notice Hanuman passing through. Bharat attacks on Hanuman falls down on the floor. Hanuman starts chanting Rama’s name. Bharat feels very guilty for attacking on Hanuman. Also Read - Trending TV News Today: Bigg Boss 16 premiere, Ghum Hai Kisikey Pyaar Meiin fans threaten to boycott the show and more

He asks Hanuman about his identity. Hanuman regains consciousness and reveals the reason behind him taking the mountain to rescue Laxman’s life. Hanuman also shares that Rama misses his brother Bharat a lot which makes Bharat very emotional. Bharat helps Hanuman to reach to the beach side but Hanuman tells him that by taking name of his God Rama, all his work are successful. Hanuman chants Lord Rama’s name and lifts up the mountain to move ahead. Rama on the other hand is eagerly waiting for Hanuman as he is worried for Laxman. After a while Hanuman reaches there with the mountain in his hand. Vaidya goes to check the Sanjeevani medicinal plants on the mountain brought by Hanuman. He prays to the holy plant so that he can use it for Laxman. Immediately he makes medicine out of those leaves. When he makes Laxman drink the medicinal syrup, fortunately it makes wonder as Laxman comes back to life. Also Read - Brahmastra: Ayan Mukerji's REACTION to backlash over Alia Bhatt-Ranbir Kapoor’s film box office collection and dialogues are unmissable

Laxman wonders to see all of them around him. Rama reveals the situation to Laxman how he got attacked by Meghnath but Sankat Mochan Hanuman. Vaidya then asks Hanuman to keep the mountain back to its original place. Hanuman accordingly does the same. Sita on the other hand feels relieved as she learns that her brother-in-law is back to life. In Lanka, Ravana and Meghnath are very furious to find that Laxman is alive. Meghnath decides to do some Yagna to improve his powers and defeat Rama in the war. Ravana asks him to be alert as their enemies are in the same area. Meghnath is very confident and leaves for the Yagya. Meghnath enters the temple of their Kuldevi for the Yagya. He sits for the veneration of Yagya to get Divya Rath. Lord Rama’s younger brother Bharat also does meditation and seeks permission from Rama to come to the war front. But Rama doesn’t want him to come there. Laxman tells him that Bharat must be restless and emotional after whatever happened with them.

But Rama is sure that Bharat will not disobey him without his permission. Laxman also respects Bharat for his greatness. By then Vibhishan comes there. He informs Rama about Meghnath doing a Yagya to get the Divya rath and reveals that if the Yagya is successful then no one will be able to kill him as per Bramha’s blessings. There is a flashback shown regarding the same where Bramha also reminds Meghnath that the enemy who will attack on Meghnath at the temple while doing Yagya will kill Meghnath. Laxman decides to defeat Meghnath. Rama asks Laxman to take Sugreev, Hanuman, Jambvat along with him to the temple of Nikumbala Devi. Vibhishan expresses his wish to help Laxman reach to the temple within a short time. Laxman tells Rama that Lord Kuber has informed him that Meghnath will use a special weapon to kill Vibhishan but also has given solution to kill Meghnath and rescue Vibhishan.He assures his elder brother Rama that this time he will end Meghnath for sure.

Laxman leaves for the temple to defeat Meghnath accordingly. Vibhishan takes Laxman to the temple with a short cut. He also asks Laxman to make his army men defeat Meghnath’s army so that Laxman can enter the temple and disturb Meghnath while he is doing the Yagya. War between both the armies begins. Angad enters the temple while fighting with Meghnath’s army. He keeps disturbing Meghnath but Meghnath keeps continuing the Yagya. Hanuman pours water the Yagya which blows out the fire. Meghnath gets very furious and shouts out loud. Vibhishan asks Laxman to attack Meghnath once he comes towards the holy Banyan Tree. Laxman accordingly challenges Meghnath for the war. This time Meghnath gets furious with Vibhishan for betraying with his own country Lanka by supporting Rama. Vibhishan explains that whatever he has done is for the wellbeing of people in Lanka and blames Ravana being wrong. Meghnath attacks on Vibhishan but Laxman intervenes and fights with Meghnath to rescue Vibhishan.

Both of them keep on attacking on each other but all the attacks done by Meghnath go fail. So he again starts using his elusive powers to fight with Laxman. Meghnath then uses Bramhastra against Laxman but Laxman bends in front of Bramha so the weapon goes fail. Meghnath keeps on using many powerful weapons but none can harm Laxman. Meghnath disappears as he gets disappointed. But Vibhishan asks Laxman to be alert. Stay tuned for more updates.