Ramayan 14 April 2020 Morning episode written update: In today's episode many of Ravana's sons get killed by Rama's army men. So at last Indrajeet asks Ravana to permit him to go for the war. Ravana finally allows Indrajeet to wage war against Rama 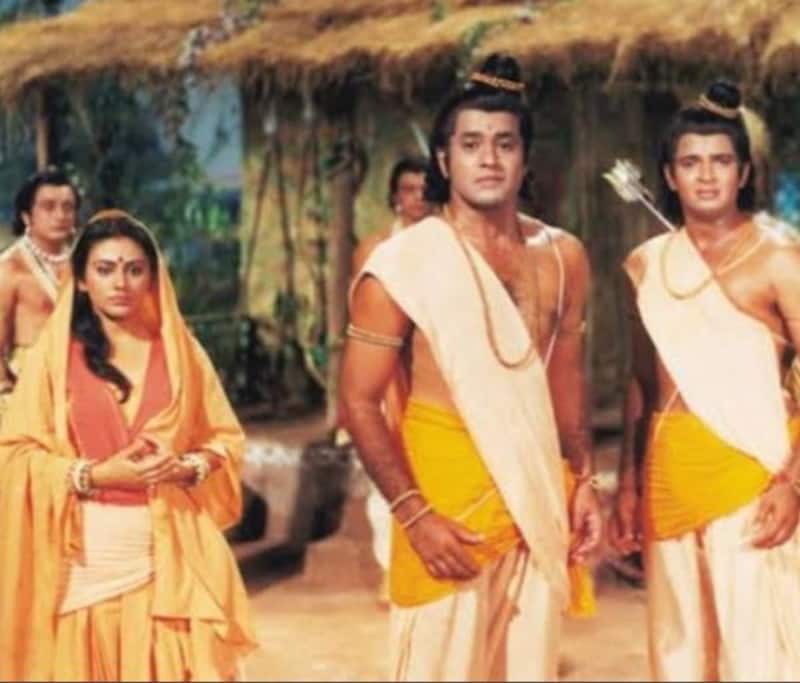 In today’s episode begins with Ravana getting furious in his court as he learns that Kumbhkarna got killed by Rama. He initially doesn’t believe that. But the leader of his army explains how Rama killed Kumbhkarna with his powerful arrows. Ravana gets very disheartened as his one of the support is no more now. Ravana’s son Indrajeet consoles him but at the same time he boosts Ravana’s confidence and asks him not to lose hope. All the worriers support what Indrajeet says. Devankat also expresses his wish to go for war but Indrajeet doesn’t allow his younger brothers to wage war against Rama as he is still alive. But Devantak, Narantak and Krishna decide to wage war against Rama. Ravana also allows them for the same. He instructs the leader of the army to support his sons and defeat Rama. On the battle front, Vibhishan is very disheartened with the death of his brother Kumbhkarna. Laxman consoles him. Rama also makes him understand that he should not feel guilty for the death of Kumbhkarna as it is all written already. Also Read - Vikram Vedha star Hrithik Roshan drops major hint about being part of Brahmastra 2 as Dev and Ramayan

Rama also explains Vibhishan that the soul of his brother Kumbhkarna is alive and he will get birth again so Vibhishan should not feel sorry for that. On the other hand Seeta learns about Rama’s bravery as he killed Devil Kumbhkarna. She also learns that Ravana’s sons Atikay, Devantak and Narantak are heading ahead for war with Rama. Seeta prays for Lord Rama’s victory. The war begins. Narantak and Angad also start fighting with each other. Atikay also challenges Laxman for war. Laxman gets very furious. He asks Rama for permission so that he can defeat Atikay. Rama also allows Laxman to wage war against Atikay. Vibhishan alerts Lord Rama as Atikay is also very dangerous like Kumbhkarna. He explains how Atikay had defeated Lord Shiva with his powers and then learnt some skills which are more powerful. Also he tells Rama that Atikay cannot be defeated with Indrasan and Sudarshan Chakra too. Vibhishan also tells Lord Rama that Atikay and his brothers are powerful but they are equally brainless as they had revealed the way to kill them indirectly to Lord Vishnu. Also Read - Jhalak Dikhhla Jaa 10: After Niti Taylor breaks down on set, her audition video goes viral [Watch]

Laxman still decides to accept challenge given by Atikay. Rama (Arun Govil) also tells Vibhishan not to underestimate his brother Laxman. Vibhishan apologizes but explains his intention to alert them about Atikay’s powerful. He also requests not to send Laxman alone but Rama decides to send Laxman alone. Laxman moves forward to have war with Atikay. Initially Atikay makes fun of Laxman. But Darooq comes forward and starts attacking on Laxman. Laxman brutally kills Darooq. Atikay gets very furious with Laxman. Both of them have a tough fight. On the other hand Prince Angad also kills Narantak. Lord Hanuman also brutally kills Devantak and Trishra. But Lord Rama is more interested to know about the winner of the war between Atikay and Laxman. King Sugreev also kills the leader of Lanka army Akampan. Lord Rama is happy as Prince Angad also defeats Nikumbh. But the war between Atikay and Laxman still continues. Also Read - Khatron Ke Khiladi 12 grand finale written update: Tushar Kalia BEATS Faisal Shaikh and Mohit Malik to be the ultimate winner

But now Laxman’s arrows go fail against Atikay as he starts using his elusive powers. Hanuman requests Laxman to sit on his shoulders so that Hanuman can take him up in the sky as Atikay also goes up in the sky with his powers. Laxman agrees. The war between Atikay and Laxman again starts up in the sky. But still Laxman’s arrows go fail. Then Goddess Vayu comes there and asks Laxman to use Brahmastra to end Atikay. Accordingly Laxman succeeds in killing Atikay. Lord Rama blesses his brother on his success and bravery. Vibhishan feels sad as almost all the brave worriers and sons of Ravana get killed except Indrajeet who is yet to come. Lord Rama also feels that when human beings will start walking on the correct path, there will not be any need to wage wars.

Many of Ravana’s army men get killed in the war so far. Ravana gets worried as his four sons Atikay, Trishra, Devantak and Narantak have been killed in the war. His wife Mandodari is also very tensed as the situation gets even worsened. Ravana’s second wife cries loud and begs for justice as her son Atikay gets killed in the war. She gets furious as Ravana loses his sons just to satisfy his ego as he wants to win Seeta. She asks Ravana not to send Meghnath for the war but Meghnath tells her that he is supposed to go for the war to safeguard the image of his Lanka and his father Ravana. He asks both of his mothers to be strong and be ready for the worst situation. Meghnath promises to take revenge for his uncle Kumbhkarna and all his brothers who got defeated in the war. On the battle front Lord Rama and Laxman try to get some idea about Ravana’s next move. Vibhishan learns that Atikay’s mother is very hurtful with the death of her son.