Rubina Dilaik shared a reel video with Abhinav Shukla in which they can be seen grooving to Aly Goni and Jasmin Bhasin's recently released music album, Tera Suit.

Bigg Boss 14 saw two amazing and powerful couples against each other. You would have guessed by now whom we are talking about. Yes, you guessed it right, we are talking about Rubina Dilaik-Abhinav Shukla and Jasmin Bhasin-Aly Goni. While Aly shared a good equation with both Rubina and Abhinav, Jasmin Bhasin had had a nasty fall out with both the husband and wife duo. But now, it seems that they have made a truce. Yes, you read that right. Recently, Rubina shared a reel video with Abhinav in which they can be seen grooving to Aly Goni and Jasmin Bhasin's recently released music album, Tera Suit. While Rubina's attitude is on point, Abhinav charms us all by trying to support his dearest wifey by grooving with her. Rubina Dilaik captioned the post saying, "Loving it #terasuit." In case you have missed it out, check the video below: Also Read - Khatron Ke Khiladi 11: Shweta Tiwari and Rahul Vaidya's 'yarana' in Cape Town is adorable – view pics 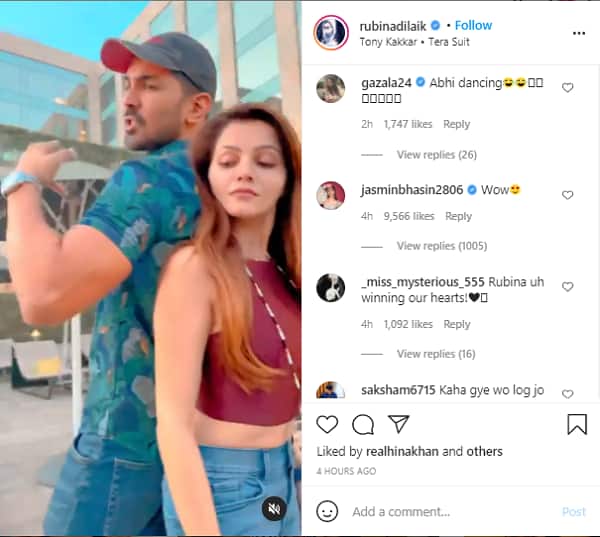 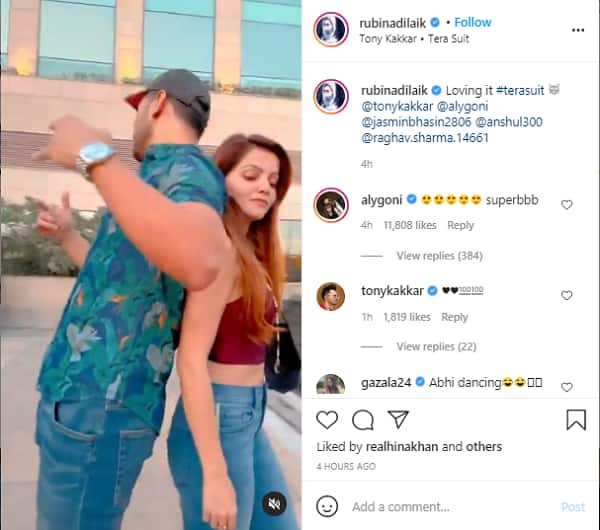 Meanwhile, earlier, the shakti Astitva Ke Ehsaas Ki actress had opened up on giving both Jasmin and Aly their space. Rubina Dilaik told Film Window, "My relationship with Aly Goni will continue. It is a beautiful bond. It will continue irrespective of my equation with Jasmin Bhasin. But I do not want to put him in a spot. He should not be troubled. As for Jasmin, I have no hard feelings. But I feel Jasmin Bhasin is still carrying grudges and bitterness in her heart. She still has the baggage of Bigg Boss 14. I want to give her the space to get over it, and we can think of it. I am always open to it."

Hey there! BollywoodLife.Com Awards 2021 are back and Nominations Are Now Open!
Click Here to Nominate Your Favourites and Stand a Chance to WIN Exciting Prizes.