Shaheer Sheikh and Ruchikaa Kapoor took to their respective social media handles and shared a snap of moments with each other, wishing and celebrating their one year of togetherness as husband and wife.

The television industry's most-loved actor and handsome hunk Shaheer Sheikh broke millions of hearts when he announced his engagement with Ruchikaa Kapoor. However, Shaheer's fans were super stoked that he had found "the one" in Ruchikaa. This time last year, Shaheer and Ruchikaa registered themselves as man and wife. And today happens to be their first wedding anniversary. Uh-huh, a year went by already. This anniversary is extra special for Rucheer as they will be celebrating it with their cute little munchkin, baby girl, Anaya. Both Shaheer Sheikh and Ruchikaa Kapoor took to their respective social media handles and shared a snap of moments with each other, wishing and celebrating their one year of togetherness as husband and wife. Also Read - Kaun Banega Crorepati 13: SHOCKING! John Abraham breaks down before Amitabh Bachchan and the reason will make you emotional too – watch video

While Shaheer put a man bowing deep down emoticon in the caption of the selfie he shared with Ruchikaa, the latter penned a few words for the occasion. Talking about the Mahabharat actor's post, Ruchikaa replied with a woman bowing down emoticon. Check it out here: Also Read - Trending OTT News Today: Never Kiss Your Best Friend season 2's BTS pics are to die for, Hawkeye's latest promo is pure MCU magic, Acharya locks its digital platform and more 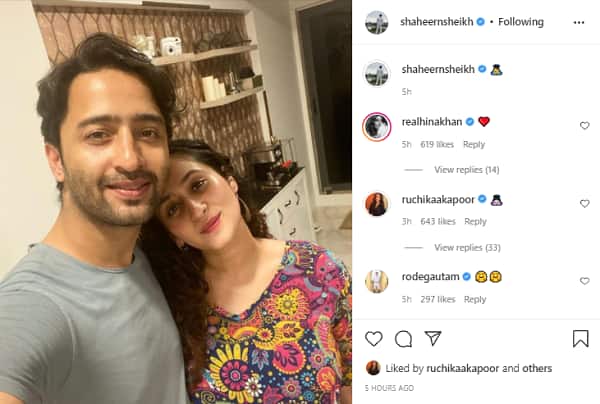 Ruchikaa seems to have shared a candid moment which she captioned saying, "Marry someone who laughs at all your jokes… especially the bad ones #lifeofadventure #1down #MadUs." Check out her post here:

Talking about their newborn daughter, Anaya, Shaheer and Ruchikaa became proud parents on 10th September. When asked Shaheer about parenthood, he had said, "Ahh! I can’t really explain in words. The feeling is so new to me and it is still sinking in and I am still trying to figure out what is happening to me because it is all new for me. The feeling is such that it can’t be put together in words. I was told that father’s take time to relate to the journey when the child is born, but from the moment I have held my little one, I have felt such a strong connection with her, I can’t tell you. It is such a beautiful and amazing experience. I’ve never ever in my life felt like this before. I don’t know how to express it. I have not felt this connected to anyone else in life, the way I feel with my daughter. Agar Woh palkein bhi chapakle Yaa thoda sa frown bhi kar le Mujhe lagta hai Kya hogaya… and what I can do for her. It is something else, the feeling is unbelievable and now I can understand what our parents must have gone through or must be going through. I know usually it is said that mother’s have a very strong connection but I don’t know why I am so connected to her."