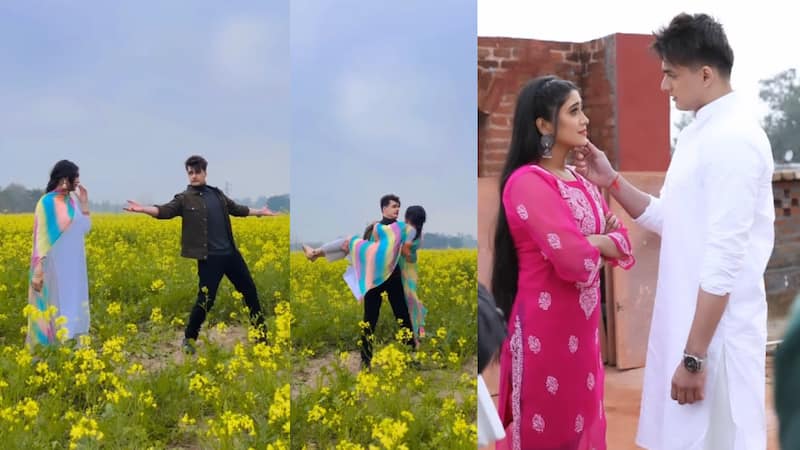 Shivangi Joshi and Mohsin Khan, popularly known as Kaira from Yeh Rishta Kya Kehlata Hai, are reuniting again. They will be seen in a music video together called Teri Ada. The two shared their first look from Teri Ada and fans were very happy that they finally have an update on their project together. A couple of hours ago, Shivangi Joshi and Mohsin Khan shared a couple of videos from the sets of their song Teri Ada. And in one of them, they turned into Raj and Simran aka Shah Rukh Khan and Kajol from Dilwale Dulhania Le Jayenge. Mohsin, like a romantic hero, also lifted Shivangi in his arms and twirled around. Shivangi commented on the post saying, "Raj - Simran vibes done right." Check out Shivangi and Mohsin's DDLj style video here: Also Read - Ranveer Singh-Deepika Padukone, Aishwarya Rai Bachchan-Abhishek; when distasteful separation rumours of Bollywood's loved couples grabbed eyeballs

Aren't they magical? Kaira fans would be super happy with the video. And that's not it, Shivangi and Mohsin also shared a BTS video from the sets of Teri Ada. Shivangi and Mohsin are seen romancing in the BTS clip. It's a scene from the song. Shivangi is seen in a pink chikan kurti while Mohsin looks handsome in a white kurta pyjama. Mohsin revealed that they'd be dropping the poster for Teri Ada soon. "A special glimpse from the sets of #TeriAda, dropping the poster tomorrow. Can't wait to share it with you all!" he said in the caption. check out the BTS video here: Also Read - Brahmastra: Mouni Roy recalls shooting 6-7 days with Shah Rukh Khan; calls it 'an out-of-body experience'

Meanwhile, the fans do miss watching them every day as Kartik and Naira. They set a benchmark as one of the most romantic jodis in Indian Television. A couple of weeks ago, a misinterpreted article of Shivangi had gone viral. It was misquoted that Shivangi was missing Mohsin while she was talking about her character, Naira. Shivangi had blasted the article in her post and even revealed that she'd be collaborating with Mohsin for a project. The fans have linked them together, however, they continue to be good friends. Also Read - Anupamaa, Ghum Hai Kisikey Pyaar Meiin, Imlie and more: SHOCKING upcoming twists in TRP ruling TV shows