Aashka Goradia was doing a live yoga session along with her husband. Shveta Salve also joined the yoga session. However, they had to leave the live video midway after the trolls started passing lewd comments.

One major drawback of being a public personality is the trolling that comes with it. It’s worse when the trolls are perverts. That’s exactly what happened with Aashka Goradia. She was doing a live yoga session along with her husband. Shveta Salve also joined the yoga session. However, they had to leave the live video midway after the trolls started passing lewd comments. Also Read - Then & Now! Aamna Sharif, Shama Sikander and more TV divas whose transformation will leave you speechless – view pics

An incensed Shveta decided to give it back to them. She took to Instagram and wrote, “Started my morning with a live yoga class performed and executed by my friends @aashhagoradia @ibrentgoble @apeaceofblueyoga. But what made me stop were the obnoxious, lewd and sexual remarks by a****les who hide behind their faceless accounts. Here is someone practicing her art, directed by her yoga teacher and husband but all that these guys wanna do are talk cheap.” Also Read - ‘Yes I Drink and Smoke,’ says Shveta Salve as she poses in a bikini to slam haters – See pic here 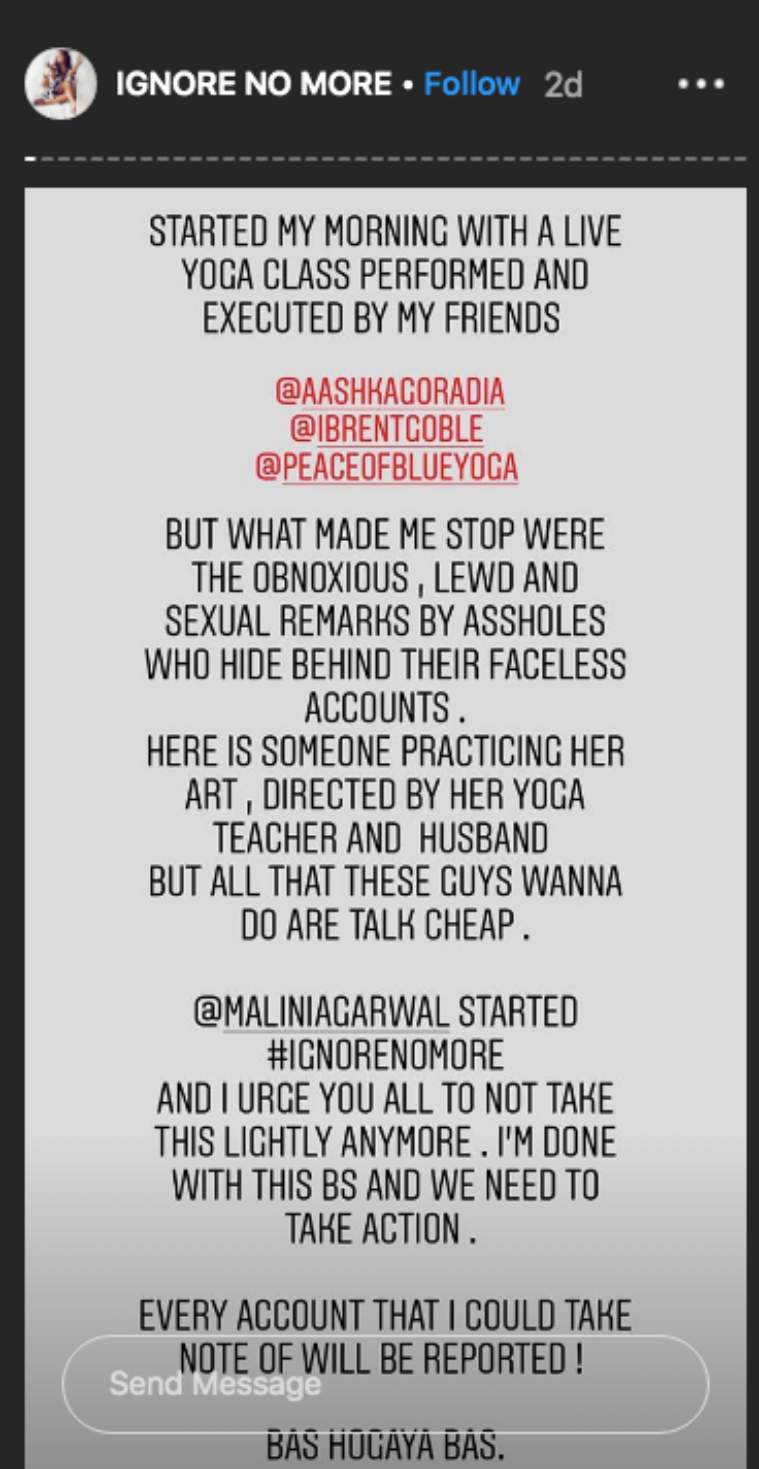 She further wrote, “I am done ignoring, blocking, turning my comments off. There’s not a single woman I know who hasn’t been sexually molested or abused in her life and now we can’t be ourselves, doing our thing (like even Yoga) without the fear of being a sexual target.”

?????? ?? ????. I am joining hands with @maliniagarwal @malinisgirltribe for this Campaign #ignorenomore Yesterday was the day when I realised how necessary it is to Stand up for the right , Speak up when you need to be heard out loud and Take Action . Because sometimes , Laaton ke Bhoot Baaton se nahi maante !! . Whoever tuned in yesterday has an idea of what conspired, if not check the "Ignore no More" Highlights but here I want to talk about You ! . You reading This ! If ever there comes a time you feel harrased , threatened or sexually abused online, you should know that ??? ???? ?????? !! Or if You reading this is someone who has unrightfully commented Sexual abuse or harassed someone online then know that ?? ???? ???? ??? ??? !!! . Online sexual harassment encompasses a wide range of sexual misconduct on digital platforms and includes some of the more specific forms of online harassment including "revenge porn" and "cyberstalking" Non-consensual sharing of intimate images and videos Exploitation, coercion, and threats. Sexualized bullying Unwanted sexualization All forms of unwelcome sexual requests, comments and content. ????? ????? ???? ??????? ????? ?? ?????: Identity theft Sec.66C Violation of privacy Sec.66E Publishing or transmitting obscene material in electronic form Sec .67 Publishing or transmitting of material containing sexually explicit act, etc. in electronic form Sec.67A Sending threatening messages by email Sec .503 IPC Word, gesture or act intended to insult the modesty of a woman Sec.509 IPC Sending defamatory messages by email Sec .499 IPC Email Abuse Sec .500 IPC Obscenity Sec. 292 IPC Obscene acts and songs Sec. 294 IPC . ??? ?? ?????? ?????? ?????????? : Make a list of the people you want to report, including their usernames/ URLs/handles. Gather their virtual information and screenshots to help in the case as a evidence . Email: cyber cell Mumbai for a legal investigation cyberpst-mum@mahapolice.gov.in shubhamcybercrime@gmail.com Make an Online complaint on www.cybercrime.gov.in . #ignorenomore #cybercrime #creepydms #re

Hina Khan supported the actress and wrote, “Abuses and perverse comments from faceless cringeful minds have no gender, no social personality. The veil of anonymity is their weapon! We all should absolutely call them out! Here’s to you @aashkagoradia. I stand with you ! I #IgnoreNoMore #LetsLiftEachOther.”

Actress Narayani Shastri also slammed the trolls. She wrote, “@shveshve thanks for standing up to this ! @aashkagoradia your practice is beautiful. Cannot help dirty minds.thats how they have been brought up i guess.”

Later, Aashka thanked Shveta by writing, “I looked up to you even when I did not know you for the way you carry yourself and the choices you make. Everything seems tremendous to me. But what you did for me yesterday sets a precedence on how a woman can lift another woman. I am so humbled and honoured that you got my back even when I wasn’t watching cause the real good counts when you are good even when no one is watching, you are that.”