Fitness and Tiger Shroff go hand-in-hand. He can do some wondrous things with his body. Well, he found the perfect gymnastics partner in Aladdin - Naam Toh Suna Hi Hoga actor Siddharth Nigam. The two did a gymnastic back flip on the tunes of Casanova in their gym. It seems the two were practising together and their synchronization in the back flip is awesome. While Tiger Shroff swears by gymnastics as part of his fitness routine, Siddharth Nigam is a national level player. Tiger Shroff posted a story on his social media with a caption, "Aladdin bhai next time magic carpet pe udenge," Siddharth responded, "hahahahaha sure". Also Read - Aladdin Naam Toh Suna Hoga: Siddharth Nigam confirms the fantasy show going off air; says, 'Very difficult to live without playing Aladdin' 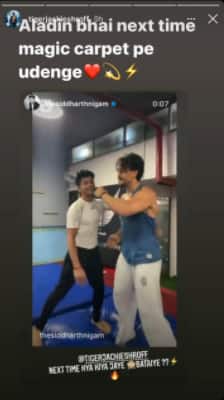 Also Read - We kid you not! Aladdin actress Naomi Scott was mistaken for Deepika Padukone

We can see that it was a power packed session for the two. Siddharth Nigam has posted a video where we can see how easily they did the flip. It has the song Casanova. Tiger Shroff's new song Casanova has been singing and dancing dressed in black and white. The sexy abs of the Bollywood hunk leave us awestruck as ever. Also Read - Aladdin 2: Will Smith and the rest of the cast to return in Director Guy Ritchie's sequel

Earlier, Siddharth Nigam had said in an interview, "For me, fitness is everything. It doesn’t only mean going to the gym and lifting weights but one has to stay fit and feel fit. Fitness plays a really important role in everyone”s life, be it youngsters or older people too. In today’s fast-paced life, it is very important to keep your mind, body and soul fit." The young actor was in the news of late as he bought a new Jaguar car.

Siddharth Nigam and Tiger Shroff are looking so good in the frame. We hope to see both of them in a project. As far as the video goes, one can watch it on loop!