Zareen Khan has lashed out at the paparazzi who followed and pushed Shehnaaz Gill and her brother Shehbaaz as she cried and ran after Sidharth Shukla's hearse.

Zareen Khan has lashed out at the paparazzi who followed and pushed Shehnaaz Gill and her brother Shehbaaz as she cried and ran after Sidharth Shukla's hearse. The actress said such behaviour from the paparazzi is heartless. Also Read - Trending TV News Today: Bigg Boss 15 confirmed contestants, Mohsin Khan-Shivangi Joshi's last shoot day in Yeh Rishta Kya Kehlata Hai and more

Reacting to the video, Zareen said, "My heart goes out to Shehnaaz, the poor girl looks completely broken. And at such a sensitive time, the media should show a little empathy towards her rather than behaving like heartless robots. I saw videos were she's crying uncontrollably but the media is just pushing her and shoving cameras and mikes on her face for a byte for their benefit. The whole scenario is compelling and heartbreaking! When did humans turn so heartless?" Also Read - When Shehnaaz Gill and Sidharth Shukla got mobbed by fans in Punjab – Watch throwback video 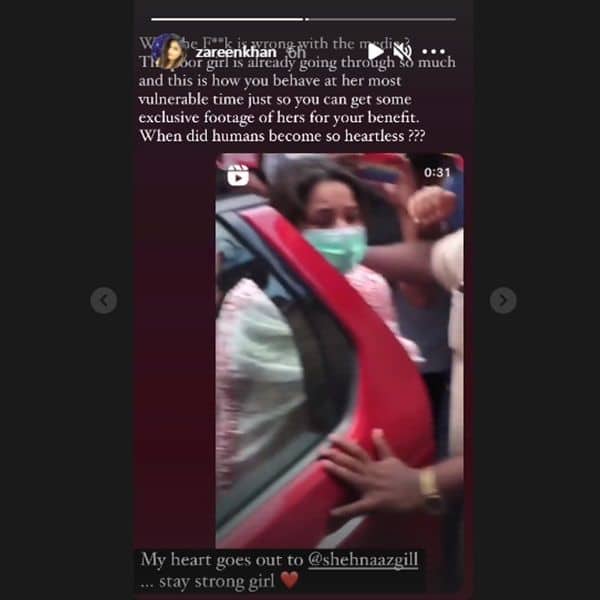 Also Read - Honsla Rakh Trailer: Shehnaaz Gill fans call her 'The next big thing' as she makes a fabulous impression on one and all

The 10-second heart-breaking video has been put up by a fan club going by the name Shehnaaz_ki_updates on Twitter. The clip, which currently has 188,000 views on the micro-blogging website, shows Shehnaaz calling out 'Sidharth' as she is seen running towards the hearse, which was carrying the mortal remains of the actor. Shehnaaz's brother Shehbaaz can be seen walking behind his mourning sister.

Sidharth and Shehnaaz, who have never openly spoken about their relationship, were popularly called as SidNaaz, a term coined by their fans during their stint in the show Bigg Boss 13.

Sidharth died at the age of 40 after suffering a massive cardiac arrest on Thursday. His mortal remains were taken to Cooper Hospital. His last rites took place in Oshiwara crematorium on Friday. He is survived by his mother and two sisters.