Ssharad Malhotra will tie the knot on April 20

Popular TV actor Ssharad Malhotra and his Delhi-based fashion designer Ripci Bhatia are all set to tie the knot on April 20 in Mumbai. The pre-wedding festivities will kickstart from April 18 and the couple will get married in a Gurudwara on April 20. Before their wedding, the lovebirds Ssharad and Ripci will also host a cocktail party for their close friends. The to-be bride Ripci recently shared a romantic still from their Roka ceremony on her social media handle which is private. However, some of her fans have got a look at it since it got leaked. The two pose romantically for the camera. Also Read - Hear This! Sharad Malhotra wouldn't mind a double date with his ex Divyanka Tripathi - read deets

The two look lovely in their styled attire. While Ssharad chose a blue suit in which looked quite dapper, Ripci opted for a pink traditional fit. Ripci also wrote a beautiful caption for the picture. "Will you ever stop running...he asked. Only if I find something worth stopping for..she said And so she did," the caption read. Also Read - Sharad Malhotra and Ripci Bhatia second wedding anniversary: A look at their romantic pictures 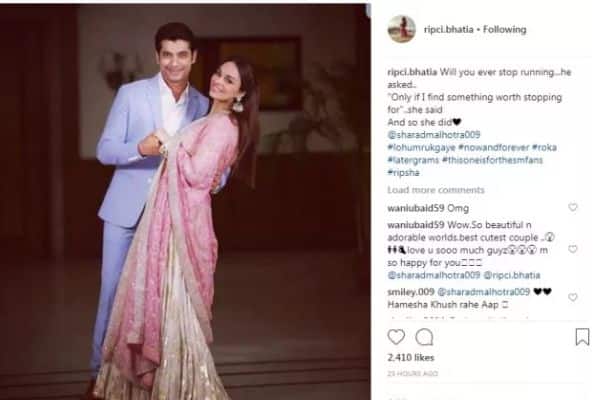 Recently, Ssharad also spoke exclusively with BollywoodLife talking about his marriage. In an exclusive interview he said, "No one expected that I would marry so soon. They thought I would give it a year but then when you meet a person and strike that connect, you know it is right. I always believed that marriage will happen when it has to happen. I feel it's right to marry now. But my friends are teasing me about being a runaway groom."

Talking about the wedding jitters he added, "Yes, there is happiness, a bit of nervousness and excitement. I have planned a few things to surprise Ripci. I hope I can pull them off nicely. I cannot reveal as it's a surprise. Thankfully, I have a great team looking into the preparations. I do not have to stress much. Pawan Kumar, the producer of my current show and I have been friends since years. He is looking into the details. I am so happy that a friend is doing this for me."

He also spoke about his to-be wife Ripci. He said, " think I was fascinated by her love for travel. I love to travel but don't get the time. Ripci has immense wanderlust. She has a lovely sense of humour. Moreover, she is an independent working woman. I love women who are financially independent and empowered. She is a very grounded woman. I do not need someone who treats me like a star. I want someone who keeps me rooted. Ripci manages to do this very well."