The Kapil Sharma Show: Amid speculations of her ouster from the show, Sumona Chakravarti shares a cryptic note on her 'horrible feeling’

While the uncertainty looms over Sumona Chakravarti's presence in the new team of The Kapil Sharma Show, her cryptic note on feeling horrible about leaving a situation has further added fuel to the fire.

The Kapil Sharma Show will soon be back with the new season with its old cast including Kapil Sharma, Krushna Abhishek, Kiku Sharda, Chandan Prabhakar and Archana Puran Singh. Joining them on the madness will be Bharti Singh and Sudesh Lehri. But it seems like Sumona Chakravarti, who used to play the role of Kapil's wife or love interest on the show, might not be a part of the new season. Her absence from the show's first promos have sparked speculations of her ouster. And while the uncertainty looms over Sumona's presence in the new team, her cryptic note on feeling horrible about leaving a situation has further added fuel to the fire. Also Read - The Kapil Sharma Show first promo OUT: Kapil Sharma pokes fun at Archana Puran Singh; gets whacked by her – watch video

"You will never know if something is meant for you if you don't give it a proper chance. Whether it's a relationship, a new job, a new city, or a new experience, throw yourself into it completely and don't hold back. If it doesn't work out then it probably wasn't meant for you and you'll walk away without regret, knowing that you put your whole heart into it. That's all you can ever do. It's a horrible feeling leaving a situation knowing that you should have and could have done more. So find the courage to take that chance, find the inspiration to make your next move, and once you do, pour your heart into it and don't look back," Sumona shared a quote from Charlotte Freeman's book Everything You’ll Ever Need on her Instagram stories. Also Read - Trending TV News Today: Reports of Indraneil Sengupta and Barkha Bisht living separately, Eijaz Khan, Arshi Khan on Bigg Boss 15 moving to OTT and more 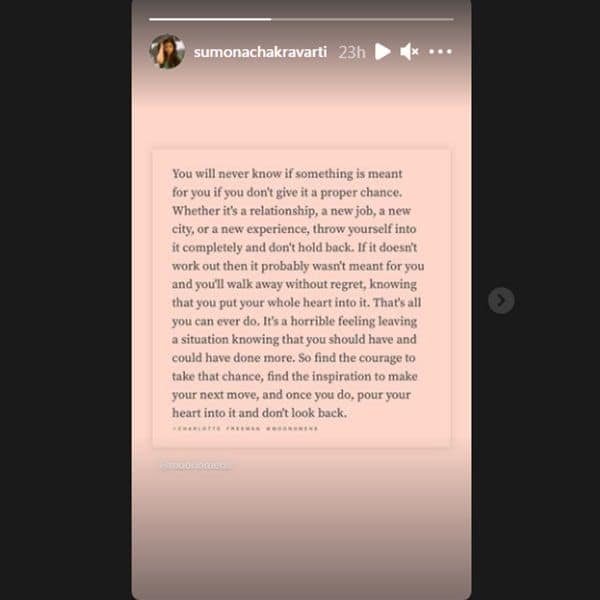 Also Read - Kiku Sharda on reuniting with the cast of The Kapil Sharma Show: You perform better when you work with like-minded colleagues

In March, Kapil has announced that they are looking forward to meeting like-minded and talented individuals who have the right passion towards entertainment. The show will be co-produced by Salman Khan Television (SKTV) and Banijay Asia.

A couple of months ago, Sumona had revealed that she is currently jobless. And while talking about going through a mental health crisis because of the Covid-19 lockdown, Sumona poured her heart out to share that she has been battling endometriosis since 2011. She added that she has been in stage 4 for many years now.

In 2019, Sumona had expressed her disappointment over people not taking small screen actors seriously and comparing them to film stars. She had pointed out the discrimination prevailing in Hindi showbiz against TV actors. She also shared how she got rejected from getting roles in several projects because of the TV actress tag.

"I know how many times my name has been turned down because I am a TV face. Arrey that girl is from 'Kapil...' show . No let's take film actor. It's just sad. Casting people are now telling TV actors to stay away from TV for a while if you want to get considered for web shows. You know what, f**k you," Sumona had written in her Instagram post.