TOP TV News: Umar Riaz opened up on his eviction from Bigg Boss 15. He revealed how he never felt bad when Salman Khan bashed him during the Weekend Ka Vaar episodes. Umar's father SLAMMED Tejasswi Prakash for laughing during his eviction. Power Ratings Report Week 2 by Ormax Media came out. Anupamaa's position slipped down a little. Naagin 5, Ishqbaaaz actress Surbhi Chandna conducted an 'Ask Me Anything' session on Instagram and it was quirky and fun. Madalsa Sharma aka Anupamaa's Kavya opened up on criticisms and shared a health update amidst concerning reports. Mohit Malik recounted the harrowing tale of Ekbir testing COVID positive. Shaheer Sheikh's nostalgia moment with Yeh Rishtey Hain Pyaar Ke team members. Mouni Roy's wedding date was revealed. So, you see, a lot happened in the TV world. Let's check out IMP news of the day... Also Read - Bigg Boss 15: Tejasswi Prakash beats Karan Kundrra and Shamita Shetty to become the most popular contestant of Salman Khan's show as per Ormax

Mouni Roy to tie the knot on THIS date

For weeks now, Brahmastra actress Mouni Roy has been making news for her wedding rumour. The actress is said to tie the knot with her rumoured beau Suraj Nambiar, a Dubai-based businessman. If reports are to be believed, the two lovebirds will tie the knot in India itself. It is being said that Mouni and Suraj will be tying the knot in a matter of 15 days. Yes, you read that right. That's not it, the wedding venue and guest list have also been revealed. Also Read - Bigg Boss 15, Weekend Ka Vaar, January 22 2022, Live Updates: Salman Khan and Mithun Chakraborty promote Hunarbaaz

Afsana Khan is going to tie the knot with her beau Saaj Sharma soon. However, a woman has accused Saaj of fraudulently getting a divorce from her and torture for dowry. The woman, Anu, has approached Mohali Court and has asked them to stop the wedding. This is shocking indeed as Afsana seems happy with Saaj.

A couple of days ago, Mohit Malik and Aditi Shirwaikar's son Ekbir Malik had tested COVID-19 positive. In an interview, Mohit revealed how one-morning Ekbir was not his cheerful self. Mohit revealed how he had isolated himself as he would step out for work. Mohit disclosed he couldn't be with Ekbir for days and Aditi took care of him all along.

Umar Riaz's eviction has been the talking point for days now. Umar has accepted his ouster from Bigg Boss 15. He is in a happy place with all the love he has gained throughout his journey. Umar opened up on getting scolded by Salman Khan during Weekend Ka Vaar episodes. Umar feels fortunate to have been given an earful by the host. Elsewhere, his father slammed Tejasswi was laughing when Umar got evicted.

Check out the story here: Bigg Boss 15: Ex-contestant Umar Riaz REACTS on getting an earful from Salman Khan on Weekend Ka Vaar

A couple of hours ago, reports surfaced concerning Madalsa Sharma's health. Her character Kavya sudden left the house of Shahs. It was speculated whether Madalsa had tested COVID positive. BollywoodLife.com reached out and rubbished all such rumours. She revealed that she is fit and fine. The actress also opened up on the criticisms that she had been getting for her character Kavya.

Check out the story here: Anupamaa: Madalsa Sharma reveals she is fit and fine; teases fans of a big TWIST on the show [Exclusive]

Check out the story here: Anupamaa: Madalsa Sharma aka Kavya on getting criticism for her role; 'I'm the only real character in the show' [Exclusive]

Surbhi Chandna recently conducted an Ask Me Anything session on Instagram. She was asked about her wedding, relationship status, new project, board exams percentage and more. The actress who was seen in Qubool Hai, Ishqbaaaz, Naagin 5 and more shows answered the questions in her own style.

Check out the same here: Naagin 5 star Surbhi Chandna opens up about wedding date, new projects and more in her ‘Ask Me Anything’ sesh on Instagram

Shakti Astitva Ke Ehsaas Ki actress Rubina Dilaik had been tested COVID-positive. The actress revealed the same post-recovery. Taking to her Instagram handle, she shared a photoshoot and revealed her ordeal in the caption that read, "Third wave crushed my health again, but couldn’t crush my spirit of getting back… Hence I always celebrate my little victories and thats what makes Life so endearing Ps : I have totally recovered !" Check out Rubina's post here:

Kishwer, Suyyash thank fans for their love and concern for Nirvair

A couple of days ago, Suyyash Rai and Kishwer Merchant's son Nirvair Rai had tested COVID positive. A couple of hours ago, Suyyash took to his Instagram handle and thanked the fans for their love, support and blessings. "We really appreciate the love and blessings you all are sending in for our lil bunz @nirvair.rai. He is doing much better. God has really been kind! We all are doing much better! Thankyou all for standing by us." They also posted a note on Nirvair's behalf in his Instagram handle. It read, "Bohot acchaa laga itna yar dekh ke jo aap sabne diya. I am better, mom dad are stronger and better. Thankyou GOD and Thanku everyone for checking on me and showering your love and blessings.' 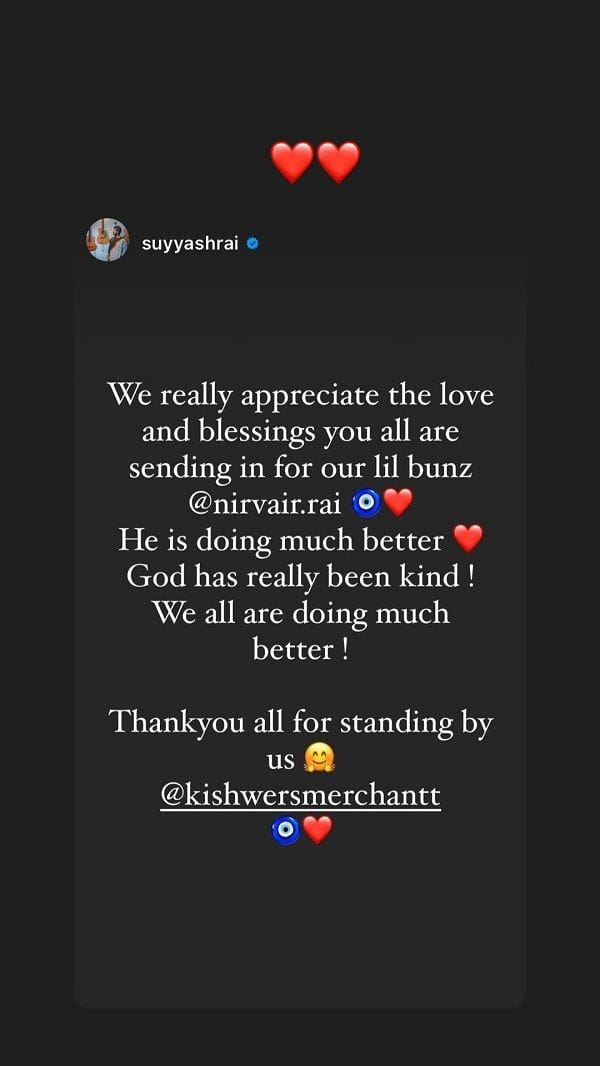 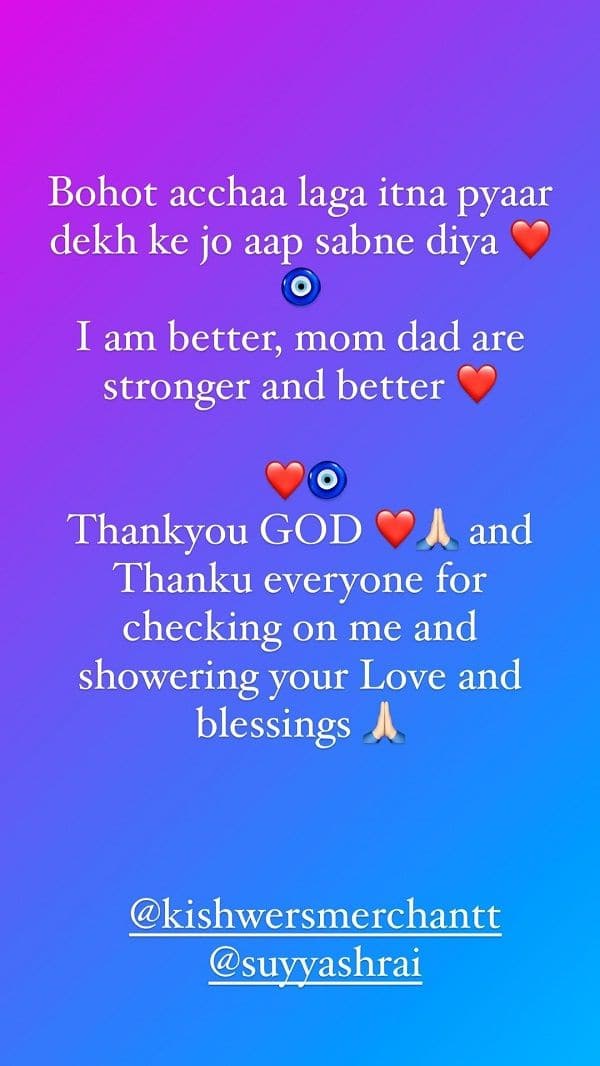