Simba Nagpal revealed Tejasswi Prakash and the rest of the cast of Naagin 6 shoot for long hours. Nia Sharma's latest photoshoot is similar to that of BTS' Jungkook's outfit, Bade Achhe Lagte Hain 2, Shaheer Sheikh and more made news in the TV section today... 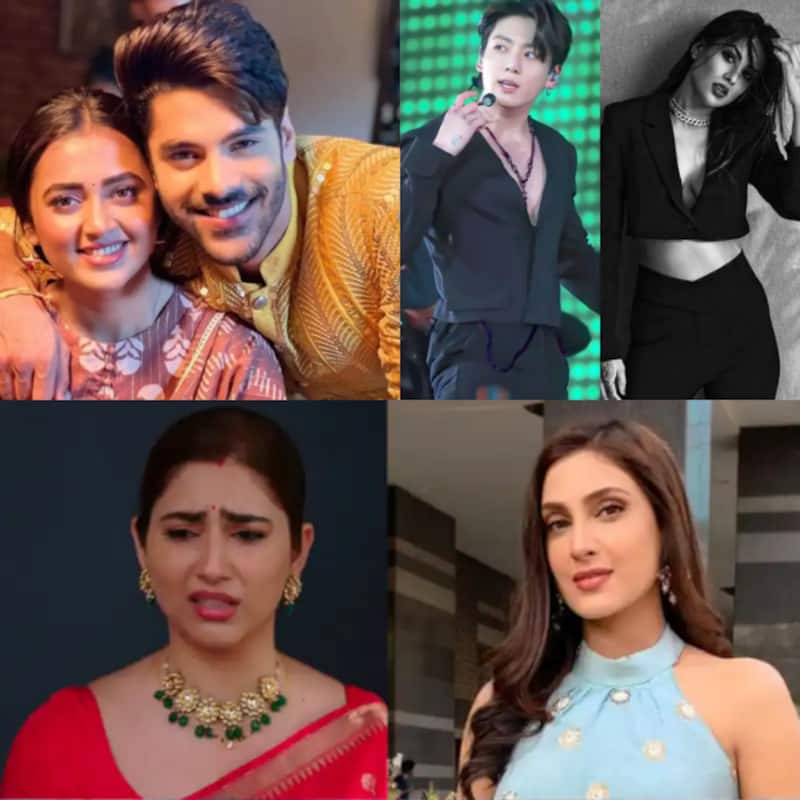 Tejasswi Prakash and Karan Kundrra are playing the lead actors in Naagin 6. They play Pratha and Rishabh respectively. Fans are loving their chemistry in Naagin 6. The show has gained momentum and the TRPs are decent too. Recently, in an interview, Simba Nagpal opened up on shooting Naagin 6. The actor revealed that the cast and crew shoot for long hours to ensure that every take is perfect. Simba revealed that they work 20-hours a day for Naagin 6. Check out more deets here. Also Read - Jhalak Dikhhla Jaa season 10: Here's a look at Rubina Dilaik, Paras Kalnawat, Nia Sharma's dancing partners

Nia Sharma recently shared a photoshoot on her gram in which she wore an all-black power suit. The Naagin 4 actress looked HOT in a short crop blazer that had a plunging neckline and matching black trousers. It is kinda similar to BTS member Jungkook's crop shirt and pants from his performance on Black Swan in the PTD concert in Seoul. Don't believe us? Check out the pictures here. Also Read - Trending TV News Today: Debina Bonnerjee-Gurmeet Choudhary announce second pregnancy, Tejasswi Prakash's Naagin 6 to undergo title change, Khatron Ke Khiladi 12 winner leaked and more

Vivek Agnihotri's film The Kashmir Files is the talk of the town right now. It has also been doing well at the box office apart from getting praises from the critics and the audience. BollywoodLife.com exclusively got in touch with Hina Khan who is Kashmiri herself. We asked Hina about her thoughts on The Kashmir Files. The actress exclusively shared with us that she hadn't watched the film yet. However, she did share her brother's experience of watching the film. Read the exclusive interview here.

Ruchikaa Kapoor took to her social media handle to share the cutest video of daughter Anaya. In the video, we saw Anaya watching her papa, Shaheer Sheikh on the TV screen. They were watching Woh Toh Hai Albelaa on TV. Anaya was quiet but Ruchikaa shared her reaction in the captions saying that Anaya felt that she had seen the guy on TV somewhere. Check out the adorable video here.

Shivangi Joshi opened up on her bond with her former co-star Mohsin Khan. The two made for one of the most loved on-screen pairs as Kaira from Yeh Rishta Kya Kehlata Hai. When asked about her bond after quitting the show of which they both were part for about 6 years, Shivangi said that nothing has changed. Read more deets here. The Balika Vadhu actress also opened up pay disparity. She spoke on behalf of the television industry as she has worked in TV more. Check out the deets here.

Nakuul Mehta and Disha Parmar starrer Bade Achhe Lagte Hain 2 is quite popular online. It may not have great TRPs but fans love to watch Ram and Priya aka Nakuul and Disha together on-screens. Recently, the makers introduced a new twist by bringing back Vedika aka Reena Aggarwal into Kapoor Mansion. Check out how RaYa shippers reacted to Vedika's return here.

Pandya Store duo Alice Kaushik and Kanwar Dhillon are one of the most loved on-screen jodis. The two play Raavi and Shiva in Pandya Store. Fans love their chemistry and had been wanting to see them together in real life as well. Alice Kaushik aka Raavi took to her social media handle a couple of hours ago and penned a heartfelt note, confessing her feelings for Kanwar Dhillon. The actress turned emotional and called him his everything. Her posts with Kanwar had sparked off dating rumours. Well, it seems this time she kinda confessed or rather confirmed the same. Check out her post below: