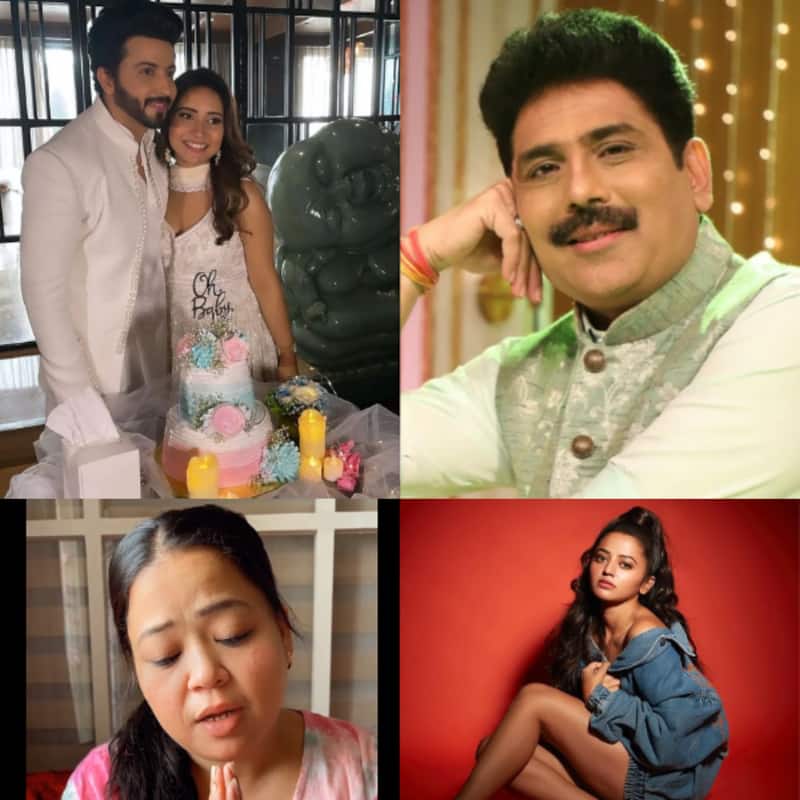 Vinny Arora and Dheeraj Dhoopar, Rupali Ganguly and Gaurav Khanna, Helly Shah, Shailesh Lodha, and more have made it to the TV newsmakers of the day. Vinny Arora and Dheeraj Dhoopar threw a baby shower and a lot of their friends and family members attended the same. Gaurav took revenge on his Anupamaa costar Rupali. Helly opened up on her feelings about walking the red carpet at the Cannes 2022. Shailesh Lodha plans on quitting Taarak Mehta Ka Ooltah Chashmah and more. Let's have a dekko at who and what made news in the TV section today...

Gaurav Khanna and Rupali Ganguly are winning hearts as Anupamaa and Anuj. They share amazing chemistry not just on screen but also off screen. Recently, Gaurav took to his social media handle and shared a goofy video of himself along with his costar Rupali Ganguly. He took revenge on Rupali who wore a pink saree. Check out what the revenge is here.

Vinny Arora and Dheeraj Dhoopar held a baby shower in the city this evening. The two lovebirds twinned in white as they celebrated the special occasion. Vinny looked extremely pretty in white. Check out the videos and pictures below:

Ishq Mein Marjawan S02 actress Helly is going to launch the poster of her film, Kaya Palat at the French Riviera. The actress shared her excitement of walking the red carpet and sharing the space with the likes of Deepika Padukone and Aishwarya Rai Bachchan to name a few. Check out what she said here.

Imlie's duo Sumbul Touqeer Khan and Fahmaan Khan are currently one of the most popular TV jodis. Recently, Sumbul took to her social media handle and shared a video with Fahmaan. The two were heading home and were seen vibing to Ranbir Kapoor's song Iktara. Fahmaan and Sumbul dished out costar and friendship goals. Check out the reactions of Arylie fans here.

Khatron Ke Khiladi 12 contestant Shivangi Joshi shared some amazing pictures on her Instagram handle. She wore a floral saree in deep Yellow by Neerus. Shivangi looked exceptionally pretty and like royalty. Fans went crazy over how gorgeous she looked. Check out the pictures here.

An old video of Bharti Singh and Jasmin Bhasin is going viral for the last few days. The actress was seen joking about beard and moustache in the video. However, it seems people of the Sikh community took offence over the same. And hence, The Kapil Sharma Show comedienne issued an apology for the same, stating she was just joking. Check out the video here.

Nakuul talks about love from Priya aka Disha's perspective

Bade Achhe Lagte Hain 2 star Nakuul Mehta and Disha Parmar are heavily shipped online. They play Ram and Priya in the show. Recently, Ram confessed his feelings for Priya. The latter, on the other hand, has a different perspective and Nakuul has shared the same in his recent interview. He said, "Love is a two-way street, no doubt but that street has its own twists and turns for people. While for some, their destination is reached quite easily, for some it takes time. Love is felt differently by different people. The fact that Ram confessed but Priya shied away, does not mean that her love is any less than Ram's. She takes care of his family like her own and is selfless, that is what love or loving means to her, even if she does not say 'I Love You'. Priya's love completes Ram. Her actions say more than words and for Ram that itself is her confession to him. The way she demands things of him, the way she has this sort of ownership of their relationship, as does Ram, it's adorable. The feeling is not bound only to those three words, it is also in the way you express it that matters to the significant other."

That's all in the TV news.