From Hina Khan and Helly Shah sizzling at Cannes 2022 to Taarak Mehta Ka Ooltah Chashmah producer's reaction on Shailesh Lodha's exit rumours, Debina Bonnerjee's informative video on her IVF journey and more... here are the TV Newsmakers of the day... 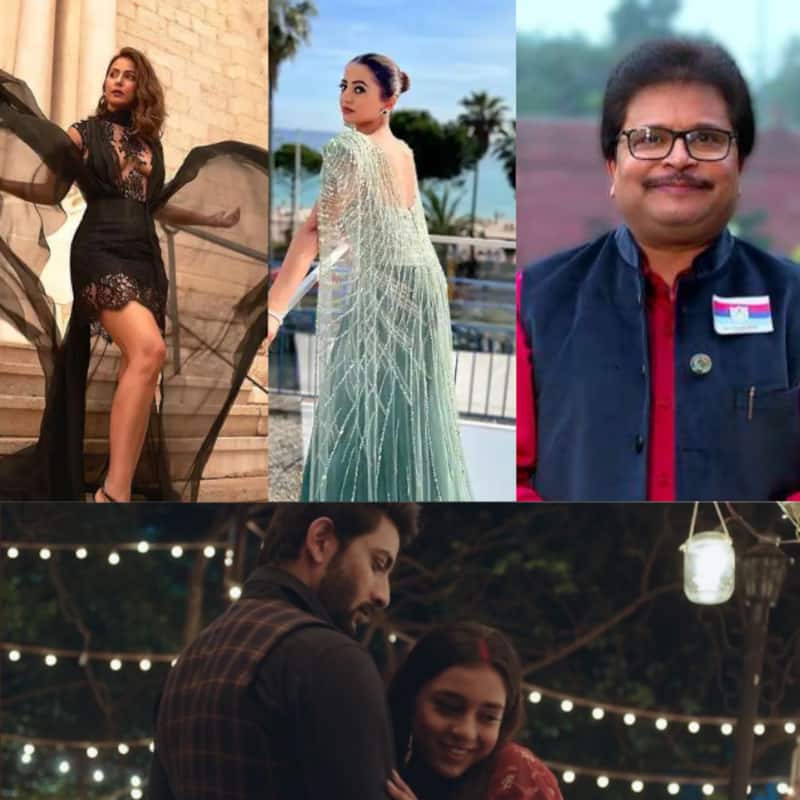 Hina Khan and Helly Shah are attending Cannes 2022 at the French Riviera. Hina shared a couple of pictures in a pleated red outfit. She next sizzled in a black sheer dress with the trail. Uff, Hina can be giving other Indian beauties a run for their money. Helly Shah, on the other hand, turned into Princess Elsa as she walked down the Red Carpet at Cannes 2022 for the first time. Check Hina Khan and Helly Shah's images. Also Read - Does Zain Imam-Reem Sameer Shaikh's Fanaa - Ishq Main Marjawan deserve a better time slot? Vote Now

Shailesh Lodha is reportedly quitting Taarak Mehta Ka Ooltah Chashmah. It has been said that the actor has not been shooting for Taarak Mehta Ka Ooltah Chashmah for about a month now. When asked producer Asit Modi, he said that he was not aware of the rumours. The producer said that he would definitely speak if there's any development on that front. Read more. Also Read - International Kissing Day 2022: Ranbir Kapoor-Alia Bhatt, Ranveer Singh-Deepika Padukone and more Bollywood couples who shared pics of passionate lip locks online

A video of Tejran aka Tejasswi Prakash and Karan Kundrra is going viral on social media right now. In it, Tejasswi unknowingly goofed up, that is, hit the door of Karan's car to a tree. It happened because of the parking. Tejasswi, upon realisation, shut the door again and looked at Karan in shock. She quickly apologized to him while the paparazzi clicked him away. Karan checked his car but it was all fine. The couple then happily posed for the paparazzi. Check out the video here:

Debina Bonnerjee opens up on her IVF journey

Debina Bonnerjee and Gurmeet Choudhary welcomed a baby girl in April this year. The actress opened up about her IVF journey. She shared loads of tips and information on IVF treatment. The actress talked at length about freezing eggs, embryo transfers and the treatment method in her new video. Check it out here:

Why Siddharth Nigam said no to KKK12

Siddharth Nigam was approached for Rohit Shetty's Khatron Ke Khiladi 12. However, the Aladdin actor couldn't take up the TV show. It is because of his prior commitments. Siddharth revealed that he Is fond of TV shows and would like to take up the next season if offered.

Balika Vadhu 2 actress Shivangi Joshi is going to participate in Rohit Shetty's stunt-based TV show Khatron Ke Khiladi 12. The actress recently opened up about her feeling about being one of the contestants. Shivangi shared that she is scared of the stunt but is pretty excited too. Shivangi is making her debut in the reality TV world with KKK 12.

Vineet Kumar Chaudhary opened up on Shashi's future track in the Nakuul Mehta and Bade Achhe Lagte Hain 2 in an interview. The actor told TellyChakkar, "As I mentioned before, Shashi will always be evil. He is never going to be a good person in the show as that is how his character is supposed to be. The viewers won't see his good side anytime soon. Shashi will keep creating troubles for Ram and his family every time which will, in turn, bring interesting twists to the story."

Right now in Rajan Shahi's Anupamaa, Anuj aka Gaurav Khanna and Anu aka Rupali Ganguly are getting married. The two lovebirds are seen in a contrasting wedding trousseau. While Rupali's outfit has white and red, Gaurav Khanna has donned a red sherwani. Paras Kalnawat aka Samar has compared his look to sweet candy. Check it out here: