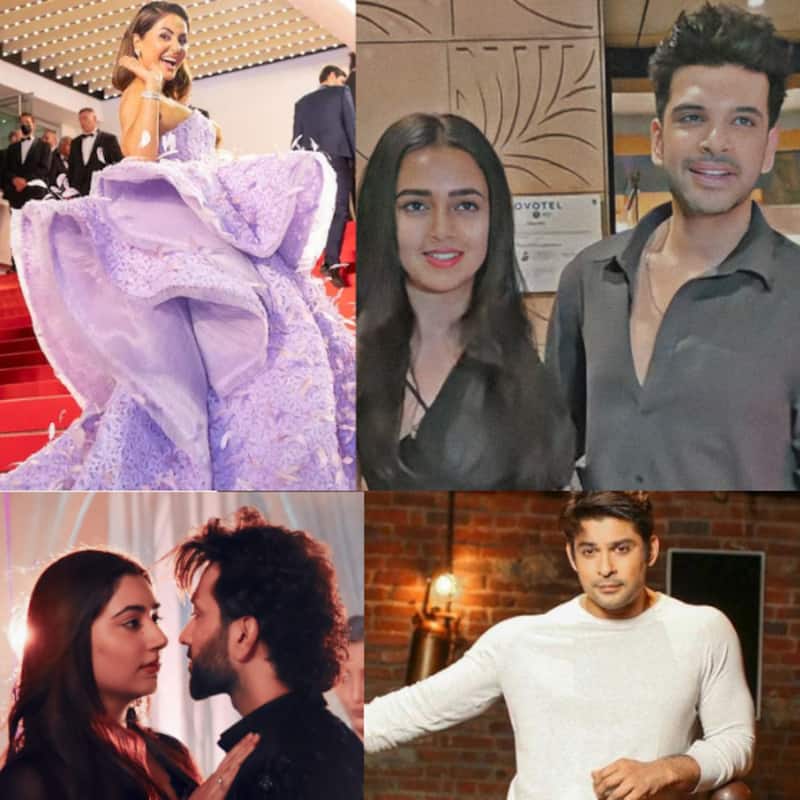 Karan Kundrra blames Tejasswi Prakash for the delay in the wedding

Karan Kundrra and Tejasswi Prakash are dating for a while. There have been a wedding and roka rumours floating around a lot soon after they got out of the house of Bigg Boss 15. And now, the Dance Deewane Junior host has opened up on the same. Karan blamed Tejasswi's hectic schedule for the delay. He told ETimes, "We don’t hide anything. We are taking it slowly. As far as marriage is concerned, madam ke pass time kahan hai. (laughs). Har interview mein woh mere upar phenk deti hai and now I will be putting it on to her. The funny part is that our parents meet each other more than us as they have more time. But we are going with the natural progression as of now." Also Read - Trending Hollywood News Today: Kylie Jenner preparing baby to be an athlete, Blackpink set to return, Viola Davis' The Woman King trailer and more

Hina Khan calls out the elitist system at Cannes 2022

Hina Khan is at the French Riviera for the Cannes Film Festival 2022. The actress recently opened up about not being invited to the Indian Pavillion where Deepika Padukone, Urvashi Rautela, Pooja Hegde and many other talents were a part of the Indian Pavillion. Hina Khan felt disheartened about not being invited to the Pavillion. She sat down for an interview with Anupamaa Chopra and said, "You know we all belong to the same industry. We are from the entertainment business. We all have come here to represent India. And I am very excited for the launch of the poster of my film. They know I'll be coming to the India Pavilion. I will be launching the poster of my film. I was very excited then came the news of...Before that I'd like to tell you there's this elitist system, elitist game which still exists. There's the opening ceremony that happened in the Indian Pavilion. Everyone was there..all the talents, my contemporaries, not just from Bollywood, we had singers, we had many well-known talents. It's not that I envy them. I am so proud of them. But at the same time it was disheartening that I was not there." The actress said that she would have sat in the audience at the very least and cheered on them. Also Read - Sonakshi Sinha's blonde look gets mixed reactions; netizens call her 'jalpari', 'Game of Thrones in Lokhandwala' and more

The makers of Jeena Zaroori Hai released Sidharth Shukla's unreleased song which also features Vishal Kotian in the lead. It seems Sidharth did not want the song to come out and he did not finish the shooting of the project either. Yet today, Jeena Zaroori Hai was released. His fans lashed out at the makers asking them to stop using Sidharth Shukla's name for profit. Vishal Kotian told BollywoodLife.com that he is just an actor and whether to release the song or not is not in his hand. He requested Sidharth's fans to watch it as it might be the last of his works. Read Vishal's interview here.

Sudhanshu opens up about wearing a moustache in Anupamaa

A new child actor has been roped in for the Nakuul Mehta and Disha Parmar starrer Bade Achhe Lagte Hain 2. And it is being said that the child actress will be Ram and Priya's daughter. Yes, you read that right. As per a report in TellyChakkar, Ram and Priya will have a baby girl in the future. Earlier a report had said that Bade Achhe Lagte Hain 2 will be taking a leap. And now it is being said that child actress Aarohi Sanvesha has been approached to play Ram and Priya's daughter in the series. Check out Aarohi Sanvesha's Instagram reel video here:

Aly and Jasmin to marry?

Aly Goni and Jasmin Bhasin took to their Instagram handles and shared stories in which they were seen talking about taking a big decision and informing their parents about the same. Fans have started speculating about it. It is being said that Aly and Jasmin are soon going to tie the knot. Jasmin Bhasin and Aly Goni have been dating since Bigg Boss 14 days and have been going strong. Let's see what the announcement is about when it drops.

Sharad opened up on TV vs other mediums

Sharad Malhotra who was last seen in Vidrohi opened up on exploring other mediums apart from TV. The actor said that for an artiste to grow, he needs to explore and work in every medium possible. However, he adds that TV means the world to him. In is chat with ETimes, Sharad said, "TV is my bread and butter but at the moment, I have several other platforms like music videos, web series, OTT, etc. to grow, explore and evolve as a professional actor. I am enjoying the space I am in currently. However, I cannot deny the fact that TV means the world to me. But for my personal growth, I needed to shift my focus towards other platforms too. TV gives you a great opportunity to earn money but at the same time, it’s necessary to grow and evolve as an actor. For that, one needs to explore as much as possible and I’m doing that."