A lot has been happening on TV and it may get a little difficult to catch up on the news sometimes, so here we are a wrap of the day for TV newsmakers. 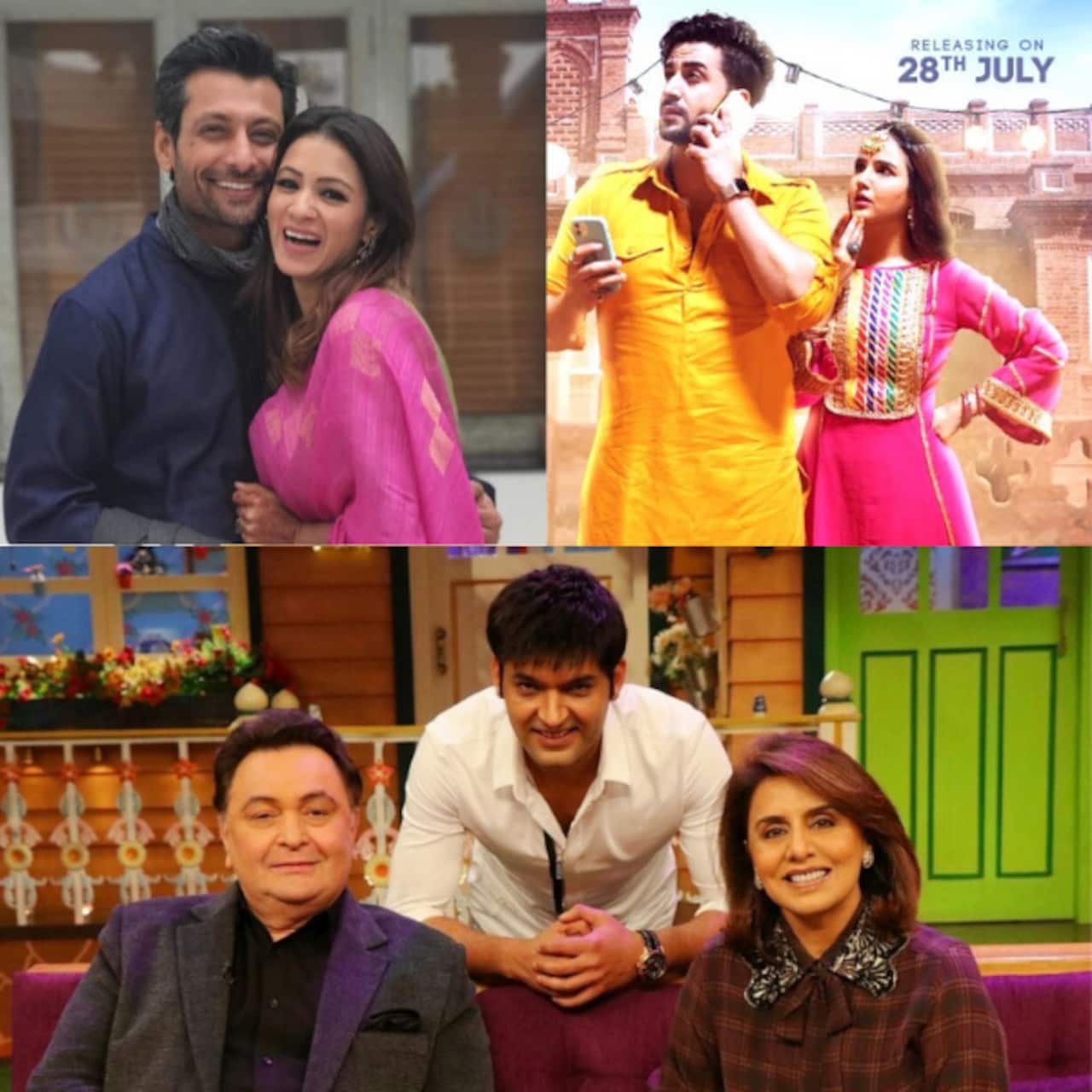 Hola, it's time to update you folks on the trending television news of the day. A lot has been happening on TV and it may get a little difficult to catch up on the news sometimes, so here we are a wrap of the day for TV newsmakers. Let's check out the list below: Also Read - 7 Times Palak Tiwari seduced the cameras like a seasoned actress [View Pics]

The marriage of Indraneil Sengupta and Barkha Bisht seems to have hit choppy waters. If reports are to be believed, the differences cropped between the two a couple of months ago. And now, as per a report in ETimes, the two of them are living separately. It says that Indraneil has moved out of their abode and has been living with his parents in the same building. It seems the reports of his link-up with Isha Sahaa have added fuel to the fire. A source told ETimes that they have decided to take a break and sort out their differences. Also Read - Rakhi Sawant tells husband Adil Khan 'Shah Rukh Khan, Salman Khan, Aamir Khan banna itna aasan nahi hai' [Watch]

The Kapil Sharma Show is coming back took. In the meanwhile, the host Kapil Sharma took to his Instagram handle a couple of hours ago and shared his favourite memory from the sets. It included one of the most loved couples of the Hindi film industry, Rishi Kapoor and Neetu Kapoor. "One of my favorite pic with both my favorites #rishikapoor ji n @neetu54 ji #memories 4 #life #tkss #thekapilsharmashow’," he captioned the post. Check it out below: Also Read - The Kapil Sharma Show: Sidharth Sagar DENIES quitting Kapil Sharma's show; says, 'I am in discussion regarding...'

A couple of hours ago, Hina Khan took to her social media handle and shared a picture in which she is seen wearing her father, Aslan Khan's shirt. She captioned the picture saying, "Wearing your clothes gives me so much peace and strength. It feels as if I am hugging you daddy. #Daddysstronggirl." Hina Khan lost her father in April this year. A couple of days ago, she had penned a heartfelt note remembering her father. Have a dekko at Hina Khan latest story below: 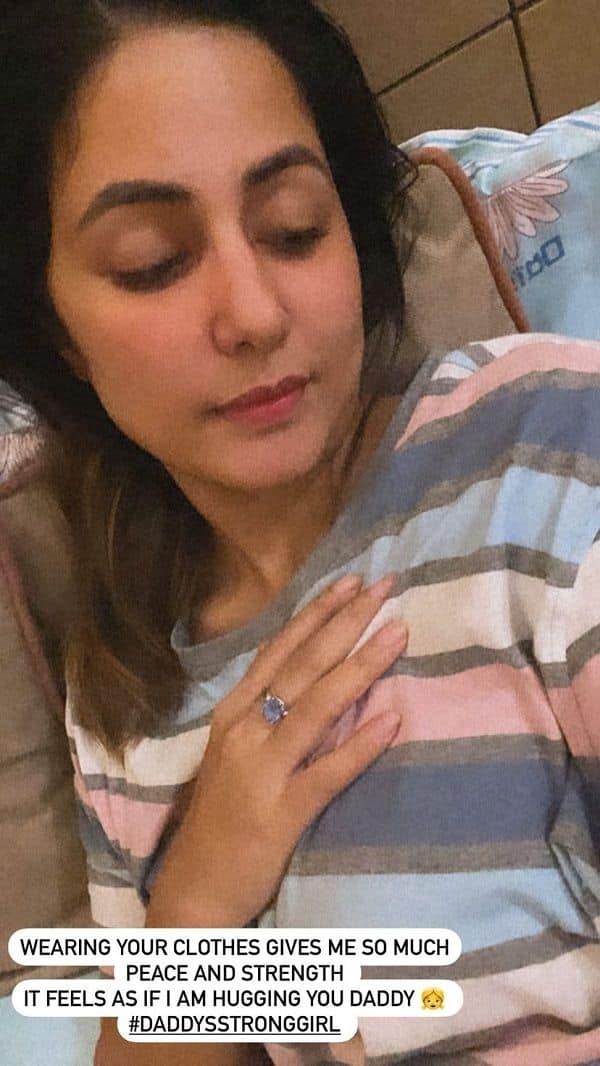 Rahul Vaidya and Disha Parmar celebrate one week of their marriage

Yesterday, Rahul Vaidya and Disha Parmar completed a week of being married. And this small journey called for a celebration. Disha and Rahul's friend gathered at their place and the couple celebrated it in a joyous manner. A video of the same is going viral on social media right now. A couple of hours ago, Rahul Vaidya also shared some pictures from their first dance as man and wife. But first, have a dekko at the lively video and Rahul and Disha's glowing faces here:

Check out Rahul and Disha's pics here: Rahul Vaidya and Disha Parmar's first dance as man and wife was a mix of romance, goofiness and unconventionality – view pics

A couple of hours ago, Aly Goni and Jasmin Bhasin, both, took to their Instagram handles and dropped the poster of their new song, 2 Phone and also announced the released date. All JasLy fans have to wait for four more days as the song comes out on 28th July. 2 Phone is sung by former Indian Idol 12 judge Neha Kakkar.

Eijaz Khan took Pavitra Punia to meet his father last night. He shared the pictures of the same on his Instagram handle. "Pappa se tujhko milaaoonga...." Eijaz captioned the post and Pavitra responded to it saying, "Blessed blessed blessed Such a iconic personality pappa. Thank you baby @eijazkhan for this. I Love you." Have a dekko at Eijaz's post below:

As per a report in Spotboye, Kundali Bhagya would be taking a leap. The makers have taken the decision in order to boost the dropping TRP of the Shraddha Arya and Dheeraj Dhoopar starrer TV show. If reports are to go by, the show will have not one, but two leaps, and new characters will be introduced, as well.

A couple of hours ago, it was confirmed that filmmaker Karan Johar would be hosting the OTT version of Bigg Boss. Arshi Khan reacted to the news in an interview with Spotboye. She said, "The contestants this time are really lucky I feel. If they manage to impress him during the show, unki to life ban jaayegi. They may get launched by Dharma Productions which eventually every actor looks forward to." Well, well, it may be true.

Former Bigg Boss contestant Eijaz Khan reacted to the news of Bigg Boss moving to OTT. In an interview with IANS, Eijaz said, "I think it is a sensible thing to do. Everyone's on it." He further added, "You do not go on a community television at home and see a show... It's not like that anymore. So, it (OTT) is personal and everything has to move. A show like Bigg Boss which sometimes has mature content should come on OTT and it is a good thing."