It's time we have a dekko at the TV newsmakers of the day. Tonight is the Weekend Ka Vaar with Salman Khan on Bigg Boss 15. He will be taking a class of every contestant for their dos and don't this past week. Anupamaa's leads keep grabbing headlines for their posts, Aly and Jasmin have grabbed headlines too. Meet the TV newsmakers here: Also Read - Bigg Boss 15: Is Rashami Desai going to leave in mid-week eviction? Worried fans hope it's not true – read tweets

Rupali Ganguly and Gaurav Khanna aka Anupamaa and Anuj have taken over the hearts of the audience with their adorable chemistry in the popular TV show Anupamaa. And it is their off-screen bond as well that has become the talk of the town. Recently, Anuj aka Gaurav Khanna shared a silhouette image of himself on his gram. Rupali was quick to comment on it. "Uffff National crush," she said. Check her comment here: Also Read - Bigg Boss 15, Day 110, Live Updates: Rakhi Sawant blames Tejasswi Prakash for playing the emotional card 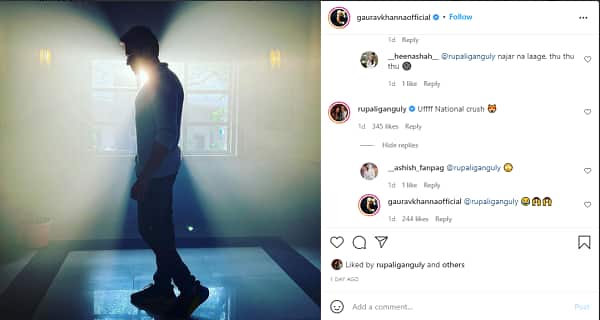 Aly and Jasmin to tie the knot soon?

Aly Goni and Jasmin Bhasin have been dating each other for a while now. The two were best friends initially and then went on to date each other during Bigg Boss 14. They have been going strong as ever. Recently, Jasmin bought a new house and Aly congratulated her on the same. Aly called it her house to which Jasmin responded saying, "Our Home." Soon fans started commenting when were they getting married. And guess what, the Yeh Hai Mohabbatein actor tried out the Instagram filter for the same.

Here's when Aly and Jasmin will get married: Aly Goni to get married with Jasmin Bhasin soon? Here's what we know

Anita talks about her comeback

Naagin actress Anita Hassanandani embraced motherhood this year. She and Rohit Reddy became proud parents of baby boy Aarav Reddy earlier this year. The actress was asked about her experience of motherhood recently. She revealed that she wonders why she didn't embrace motherhood earlier, calling it the most beautiful experience. Anita Hassanandani also opened up on her comeback to TV plans. The actress said that right now her only focus is her son and raising him. Hence, the actress won't be looking out for major projects as such for another two years or so. Well, we all will wait for your comeback, Anita!

Anupamaa's Vanraj aka Sudhanshu Pandey is celebrating his real wedding anniversary today. The handsome hunk took to his social media handle and shared a picture of himself and his wife Mona Pandey to wish her on their wedding anniversary. He penned a heartfelt note thanking her for being his rock throughout the years. "TO THE WOMAN WHO AFTER MY MOTHER HAS BEEN THE BIGGEST BLESSING , INSPIRATION , SUPPORT AND THE BALANCE OF MY LIFE , MY WIFE MONA. THANK U FOR EVERYTHING MONA. THANK U FOR BEING THE REASON FOR ME EVEN REACHING WHERE I HAVE TODAY. THANK YOU BRINGING UP OUR BOYS SO WELL. THANK U FOR GIVING ME A FAMILY @mona.pandey. HAPPY ANNIVERSARY JAI MAHAKAAL(sic)," his post read. Check out his post here:

Bigg Boss 14's Nikki Tamboli is known for her fashionable style file. The actress recently shared some photoshoot pictures that are going viral on the gram right now. In the pictures for a magazine cover photo, Nikki went bold yet beautiful in green sequin Lehenga Choli.

In the upcoming episode of Bigg Boss 14 Weekend Ka Vaar, Salman Khan will be slamming contestants for their behaviour throughout the week. Salman will be seen taking Karan Kundrra's class for his violence against Pratik Sehajpal.

In the upcoming episode of Bigg Boss 15 Weekend Ka Vaar, we will see Salman also slamming Shamita Shetty for her nasty fight with Abhijit Bichukale. Salman will be furious with Shamita for making an issue of Abhijit's 'pairon ki jutti' remark.