It's time to walk you through the trending TV newsmakers of the day. A lot happened in the last couple of hours. So, let's get to know what made news in the TV world

And just like that, another day is coming to an end. And this means it’s time to walk you through the trending TV newsmakers of the day. A lot happened in the last couple of hours. So, let’s get to know what made news in the TV world… Also Read - Bigg Boss 15, Day 56, Live Updates: Rakhi Sawant's husband Ritesh finally reveals his identity as he enters the house as the 4th VIP member

Ekta Kapoor is known for her top-rated TV shows. The TV Czarina made an appearance last night on Salman Khan’s show, Bigg Boss 15 alongside Anita Hassanandani and Surbhi Chandna. And guess what? The producer announced a new season of Naagin. Yes, Naagin 6 is coming next year! Ekta revealed that the new season will premiere on 30 January 2022, and it will feature an actress whose name starts with the letter ‘M’. It has left the fans thinking whether Mouni Roy is making her return to TV with Naagin. Also Read - Shehnaaz Gill, Tejasswi Prakash, Gauahar Khan, Nora Fatehi, Nikki Tamboli: 11 hottest Bigg Boss contestants who stole all hearts away

KVB and Teejay get trolled

Karanvir Bohra and Teejay Sidhu recently held a birthday party for their twin daughter Bella and Vienna. It was a Squid Game themed birthday party. The video of the same was shared by the paparazzi on social media. Netizens brutally trolled KVB and Teejay for the same.

Check out the story here: Karanvir Bohra and Teejay Sidhu get trolled for Squid Game themed birthday party for daughters Bella and Vienna; fans ask, 'Where are we heading?'

Last night in Bigg Boss 15 Weekend Ka Vaar, Miesha Iyer and Ieshaan Sehgaal were eliminated. Salman Khan slammed Simba but called his reaction to throwing Umar Riaz in the poll as a reaction to Umar’s instigation. Miffed Netizens had slammed Salman Khan and the makers of Bigg Boss for the same. On the other hand, Miesha and Ieshaan expressed their disappointment in getting eliminated from the show.

Ekta Kaul held an ask me anything session on Instagram recently wherein she was asked a disgusting question. A troll asked her about her views on marrying a divorced person. She clapped back at the troll in the most savage manner. Check out the picture below: 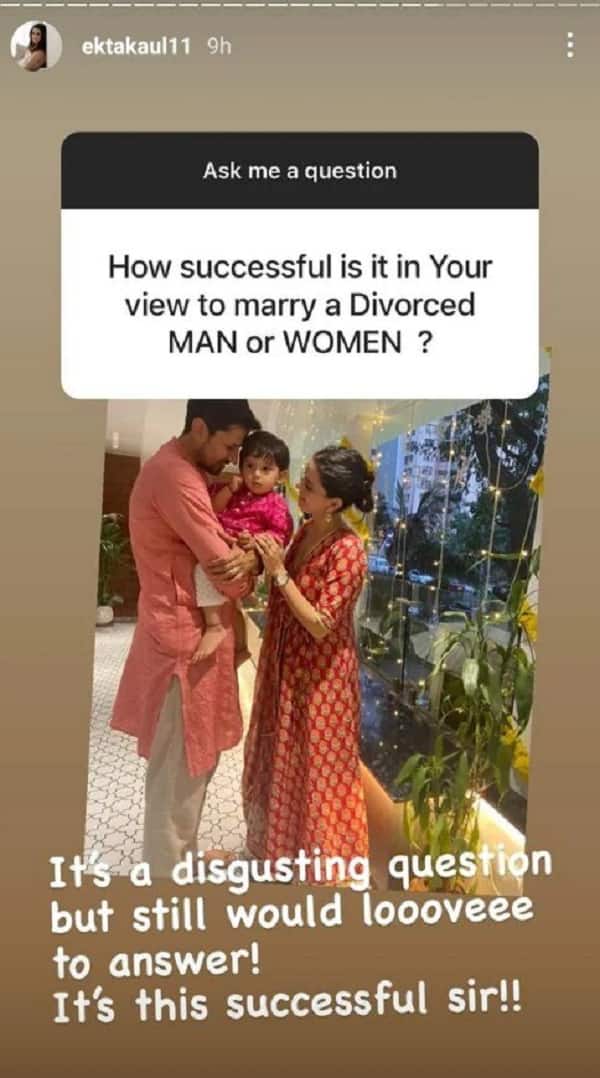 Rubina Dilaik’s sister Jyotika Dilaik got engaged to Rajat Sharma in a traditional and intimate ceremony. Rubina took to her gram to share the pictures of the same. Check them out below:

Divyanka-Vivek’s dinner in the air

It’s Vivek Dahiya’s birthday today and the actor along with his actress wife, Divyanka Tripathi, is having a blast in Dubai. Last night, they had dinner in the air as a part of Vivek’s pre-birthday celebrations. Check out the videos and pictures below:

That's all, see y'all tomorrow.