Indian Idol 12: Not Shanmukhapriya or Mohd Danish, THIS contestant has been declared as the winner

The singing reality shows Indian Idol season 12 is nearing its grand finale and viewers will get their winner on August 15.

The singing reality shows Indian Idol season 12 is nearing its grand finale and viewers will get their winner on August 15. Well, the show has got its top six contestants including Pawandeep Rajan, Arunita Kanjilal, Shanmukha Priya, Mohammad Danish, Nihal Tauro, and Sayli Kamble. Also Read - Trending TV News Today: Shaheer Sheikh opens up on the time he was jobless before Mahabharat; Karan Kundrra approached for Salman Khan's Bigg Boss 15 and more

The makers of the show have promised to have a grand finale of 12 hours. On the other hand, the contestants are leaving no stones unturned in securing their place in the top 3 list. Though the makers did not announce the Indian Idol season 12 winner yet, the netizens seem to have decided the winner already. Also Read - Indian Idol 12 is over but Pawandeep Rajan and Arunita Kanjilal's magical chemistry is still intact; these BTS pics are proof

Recently, we created a poll and asked Indian Idol 12 fans who they think will grab the trophy among Arunita and Pawandeep? Both Pawandeep and Arunita have managed to be in news with their fake love angle but have received a tremendous amount of love for their exceptional performances. Pawandeep and Arunita share a good bond and their pictures speak volumes about their true friendship. Also Read - O Saiyyonii song out: Pawandeep Rajan and Arunita Kanjilal's sweet chemistry is unmissable – watch

Time and again, Arunita and Pawandeep have proved why they deserve to be on the top of the game. The poll result is out and 67% of people have voted for Pawandeep while 33% want to see Arunita winning this season.

Take a look at the poll result: 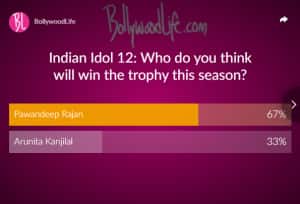 We cannot wait to see what unfolds at the semi-finals and fans' reaction to the elimination. Till then, stay tuned to BollywoodLife for all the updates on your favorite singing reality show.