The most popular singing reality show, Indian Idol season 12 is gaining a lot of attention these days. The grand finale of Indian Idol is just around the corner and India will get its top 4 contestants who will then battle for the trophy. Post elimination of Sawai Bhatt and Anjali Gaikwad, the show now has 7 contestants left icnlduing Pawandeep Rajan, Arunita Kanjilal, Shanmukhapriya, Nihal Tauro, Mohd. Danish, Ashish Kulkarni, and Sayli Kamble. Also Read - Indian Idol 12: Fans SLAM judges for being biased towards Arunita Kanjilal and not praising Pawandeep Rajan despite his one of the best performances – view tweets

Well, we had asked the fans who they think will be in the top 4. Well, the verdict is out and 33% have voted for Pawandeep Rajan, Arunita Kanjilal, Sayli Kamble, Ashish Kulkarni, while 29% have voted for Pawandeep Rajan, Arunita Kanjilal, Danish and Shanmukhapriya. Have a look at the results below: Also Read - Trending TV News Today: Divyanka Tripathi on rejecting BALH2, Arjun Bijlani faces fans' wrath after Sourabh Raaj Jain's elimination from Khatron Ke Khiladi 11 and more 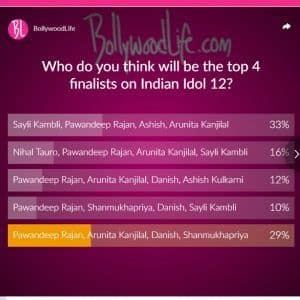 Anu Malik is seen judging the show along with Sonu Kakkar and Himesh Reshammiya. Anu Malik was removed in the past seasons after several women accused him in the #MeToo movement. Singer Sona Mohapatra recently tweeted that how it is India's shame that Anu Malik is still on the seat and tagged Smriti Irani.