The adventure-based stunt show Khatron Ke Khiladi season 11's grand finale was shot on Tuesday, September 21. The viewers are quite excited to know the name of the winner. While the entire cast and crew shot for the tasks in Cape Town, the finale shooting happened in Mumbai. There was a constant debate over the name of the winner of Khatron Ke Khiladi on social media. Arjun Bijlani, Divyanka Tripathi, Rahul Vaidya, Vishal Aditya Singh, and Shweta Tiwari are the top five finalists of the show and their fans were rooting for them. The name of the winner will be officially announced to the viewers this coming weekend on September 26. Also Read - Arjun Bijlani, Karan Kundrra, Sanjeeda Shaikh and 7 more TV celebs who earn big bucks through their side businesses – view pics

Amid all the chaos, Arjun Bijlani's wife Neha Swami shared a glimpse of the beautiful trophy on her Instagram account. Post shooting the finale, Arjun hosted a party at his home to celebrate his victory. The KKK 11 winner partied last night with his wife and his friends. They had a gala time together and even shared pictures on their social media. This clearly hints that Arjun might have just won the show and hence he is in the celebration mode. Several pictures and videos of Arjun and his wife Neha dancing on popular songs have gone viral. While the channel has not announced the details of the winner yet. Also Read - TRP Report Week 40: Bigg Boss 15 fails to get love from the audience; Anupamaa keeps ruling the chart 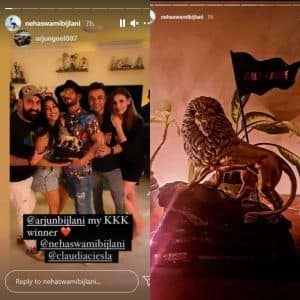 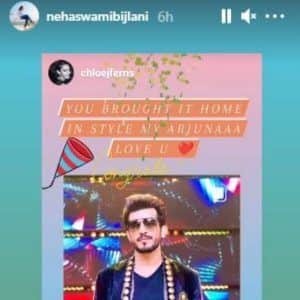 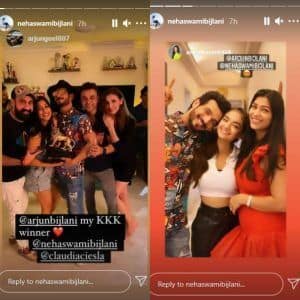 Anushka Sen, Shweta Tiwari, Vishal Aditya Singh, Varun Sood, and others had a blast at the party. The entire gang of Khatron Ke Khiladi season 11 partied all night and enjoyed themselves to their fullest. Arjun's friends and his fans have flooded social media with congratulatory messages. Taking to Instagram, Arjun's wife Neha Swami Bijlani wrote, "I'm soooooo proud of you my jaan... I know what you have done really.. you deserve all the happiness in the world.. @arjunbijlani."