Lock Upp fame Mandana Karimi breaks silence on being trolled for twerking in a hijab; says, 'I am done'

Lock Upp's former contestant Mandana Karimi finally reacts on being trolled for twerking in a hijab. She shared a picture of herself in top and shorts and wrote, "And of course reading comments on my burka reel."

Lock Upp's former contestant Mandana Karimi who was last seen in Kangana Ranaut's hosted reality show has been surrounded with problems. Recently, the gorgeous actress shared a video on her social media account wherein she was seen twerking in a hijab in Istanbul. Within no time, her video went viral on the internet and netizens slammed her for 'disrespecting' and 'mocking' the hijab. Mandana's comments section was filled with hate as netizens lashed out at her for making fun of the hijab. Also Read - Amidst Charu Asopa-Rajeev Sen divorce rumours, here's a look at 5 celebrity couples and their short-lived marriages

Recently, Mandana reacted to the hate after she got trolled for twerking in a hijab. She took to her Instagram stories and wrote, "And of course reading comments on my burka reel. DAMN people are crazy, this is a crazy world. I'm done, I wanna be a unicorn." Also Read - Poonam Pandey dons a strapless body-hugging mini dress; fans say, ‘Looking sizzling’ [View Pics]

Have a look at her post - Also Read - Akshay Kumar-Priyanka Chopra to Hrithik Roshan-Kangana Ranaut: SPICIEST extra-marital affairs of Bollywood celebs that left everyone shocked! 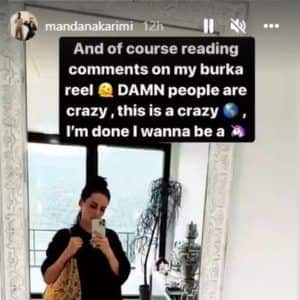 Mandana has now deleted her twerking video after receiving a lot of hate on social media. She had captioned the video as, "I wish shooting with a hijab was as easy as this BTS...NO HATES just bunch of people making a film." In the video, Mandana wore a black burqa and was seen twerking to The Beatnuts' Shakaboom at a store in Istanbul, Turkey.

Earlier, Mandana grabbed attention for her topless pictures, towel series, and much more. She knows how to grab everyone's attention and aces this skill like a pro. During her stint in Lock Upp, Mandana revealed that she had to abort her child and she went through emotional trauma. Mandana participated in Bigg Boss 9 and Lock Upp season 1.