Bigg Boss 15 friends Karan Kundrra and Vidhi Pandya recently reunited after a long time. The two had a fun time together and also shared a cute mirror selfie picture.

Lock Upp jailor Karan Kundrra recently reunited with his friend from Bigg Boss 15 Vidhi Pandya. The two met on May 6 and had a gala time together. Vidhi shared a cute picture of them on her social media. In the mirror selfie picture, the two were seen standing close together and were all smiles as they met after a long time. Vidhi captioned the picture, “Hi Motku.” Both, Vidhi and Karan looked super cute together in this picture. Vidhi donned a beautiful ethnic outfit while Karan looked handsome in a casual avatar. Also Read - Khatron Ke Khiladi 12: Rajiv Adatia reveals the scariest thing that happened to him in life [Exclusive] 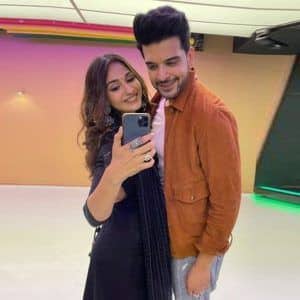 Also Read - Devoleena Bhattacharjee OPENS Up about a horrific incident that happened in same premises she lives in; says she is ‘terrified’

Back in March, Karan and Vidhi had met and Naagin 6 actress Tejasswi Prakash had accompanied them later. The trio reunited post the end of the reality show. They shared fun pictures and videos from their fun outing. During their stay in Bigg Boss 15, Vidhi, Karan, and Tejasswi bonded well and their friendship even became stronger with each passing day.

On the work front, Karan is currently busy with multiple projects. He is currently seen in Lock Upp and Dance Deewane Juniors. While Vidhi is playing the lead in Mose Chhal Kiye Jaye opposite Vijayendra Kumeria.