Actress Mouni Roy will walk down the aisle with her beau Suraj Nambiar on January 27 (Thursday). The pre-wedding functions including haldi, mehendi and sangeet have already started.

Naagin actress Mouni Roy is all set to tie the knot with her beau Suraj Nambiar on January 27 (Thursday). The Bollywood actress will have a grand wedding in the presence of her family members and close friends. Mouni and Suraj will take nuptial vows in Goa. Their wedding functions have kickstarted already in the exotic beach location and pre-wedding functions like haldi, mehendi and sangeet will also take place. Mouni's close friend Aashka Goradia shared a picture of the bride-to-be on her Instagram story. Aashka re-posted designer Anuradha Khurana's picture featuring the bride-to-be Mouni with the caption 'Today'. Also Read - Priyanka Chopra to Shilpa Shetty Kundra: 7 actresses who got criticized for their 'wrong' attitude 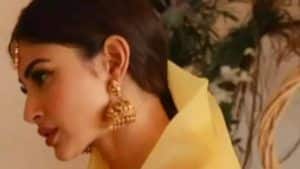 In the picture, Mouni donned a bright yellow outfit and paired it with jewellery. The bride-to-be looks super gorgeous in the picture and we cannot take our eyes off her radiant glow. In the background, on the picture 'Mehendi Hai Rachne Wali' song was added. Well, fans are wondering if the picture of Mouni is from her mehendi function.

Mouni and Suraj decided to take their relationship ahead after dating each other for over two years. Well, reportedly the two have cancelled their wedding reception in Mumbai due to an increase in COVID-19 cases.

On the professional front, Mouni will be seen in Zee TV's Dance India Dance Little Masters as a judge. She will also be seen in Ayan Mukerji's Brahmastra alongside Ranbir Kapoor and Alia Bhatt. The film will hit the theatres in September 2022.