Bigg Boss 13 winner Sidharth took to his Instagram handle to share a picture which is going viral on social media right now. Bigg Boss 14 contestant Jaan Kumar Sanu's comment on the same has won over all SidHearts. Check out full story below:

Sidharth Shukla is undoubtedly one of the hottest hunks of the entertainment industry. his participation and ultimate win in Bigg Boss 13 increased his fame 100 folds. He has been since winning hearts with music videos and photoshoots. Each and every picture that he has shared on his Instagram has gone viral within minutes and that's what has happened even now. As you read this, a picture of Sidharth Shukla is going viral on the net in which the Dil Se Dil Tak actor is flaunting his tattoo. The actor is seen sitting on a chair, with minimal lighting. The tattoo on his forearm has become quite a rage. Sidharth Shukla captioned the post saying, "Guess who’s Comin....." This picture and the tattoo have created quite a storm on social media already. And joining the bandwagon is Sidharth's ardent admirer and former Bigg Boss 14 contestant Jaan Kumar Sanu. Jaan's comment on Sidharth's picture has won over all the SidHearts. He commented on the actor's post saying, "King is coming." Firstly, have a dekko at the Humpty Sharma Ki Dulhania actor's Instagram post here: Also Read - A look at Sidharth Shukla's dating history before fans paired him up with Shehnaaz Gill – watch video

Have a dekko at Jaan Kumar Sanu's comment on Sidharth Shukla's post here: Also Read - Is Sidharth Shukla taken? The Broken But Beautiful 3 actor has the answer 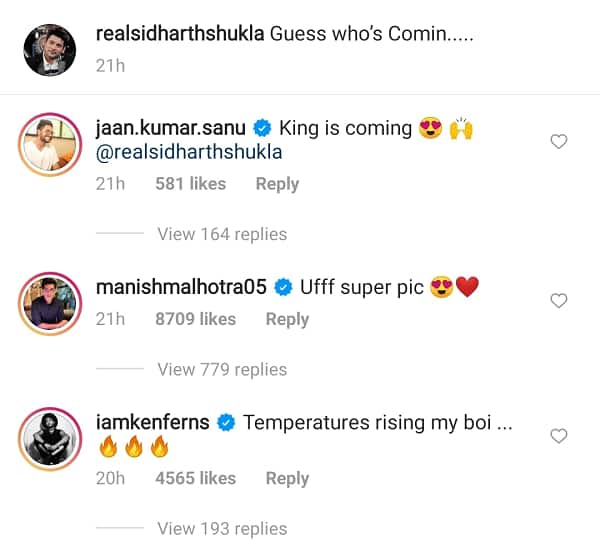 Coming to Jaan Kumar Sanu’s comment on it, it is a well-known fact that Jaan is an ardent admirer of Sidharth Shukla. He would follow his footsteps in Bigg Boss house back when he was a contestant.

What do you have to say about Sidharth Shukla's picture and Jaan Kumar Sanu’s comment on the same? Let us know by tweeting @bollywood_life.