Yeh Rishta Kya Kehlata Hai has a huge fan base already. Harshad Chopda's Abhimanyu, Pranali Rathod's Akshara and Karishma Sawant's Aarohi are winning hearts with their acting chops every single day. Abhi and Akshu aka AbhiRa have gained a fanbase online due to their sizzling chemistry. Now, in the upcoming episode of Yeh Rishta Kya Kehlata Hai, we will see Abhimanyu asking Akshara to meet him at the sunset point. Abhimanyu has learned about Aarohi's lie. Abhi now knows that it was Akshara who saved his life and not Aarohi as everyone believes. Also Read - TV News RECAP: Hina Khan-Helly Shah stun at Cannes 2022, Shailesh Lodha quits Taarak Mehta Ka Ooltah Chashmah, Shivangi Joshi’s birthday bash and more

Harshad Chopda's Abhimanyu will rush out to Goenka house to confront Akshara. He will ask her to confess her feelings. Akshara will refuse to answer. Well, the clock is ticking as it's Abhi and Aarohi's wedding day. Abhimanyu wants Akshara to tell the truth and hence he will give her an ultimatum asking her to come and meet her at Sunset point. He also threatens her saying that he will do something so terrible that she cannot even think about it. Now, a promo has been released by the channel. It features Akshara reaching the sunset point. She gets Abhimanyu's message which says that she doesn't care about him. So whether that person is alive or dead, doesn't really matter. He says that he has only loved her and he will love her even after his death. Akshara is devastated with the same. She calls him from the cliff point. Also Read - Nakuul Mehta-Disha Parmar, Harshad Chopda-Pranali Rathod and more – Which TV couple's romance did you like most this week? Vote now

Akshara then confesses her feelings for Abhi. And then the hero makes his hero wali entry. Harshad Chopda descends the branch like a spiderman and surprises Akshara. Now, AbhiRa fans are loving the whole confession scene but the spiderman wala entry bit has been the talk of the town. Check out the comments here: Also Read - Anupamaa, Ghum Hai Kisikey Pyaar Meiin, Yeh Rishta Kya Kehlata Hai – SHOCKING TWISTS in upcoming episodes of TOP 7 TV shows 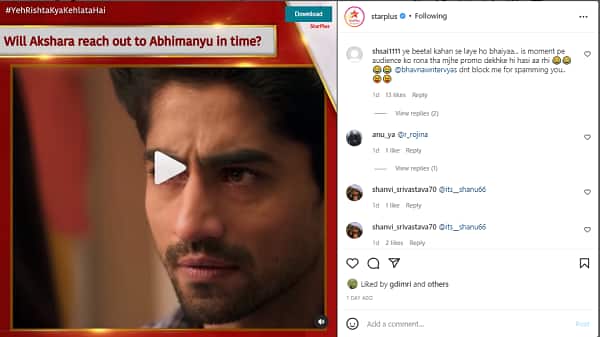 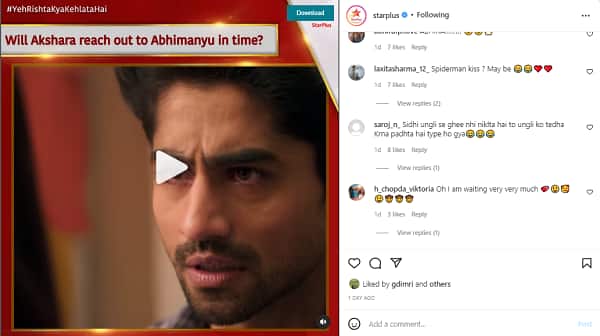 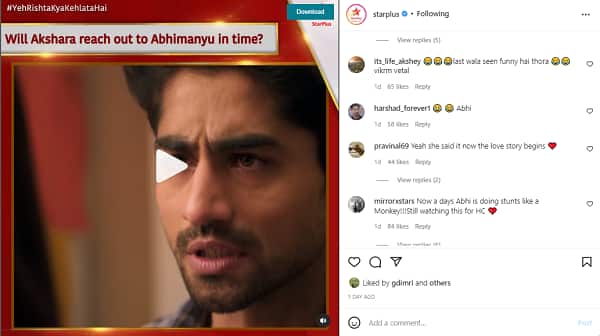 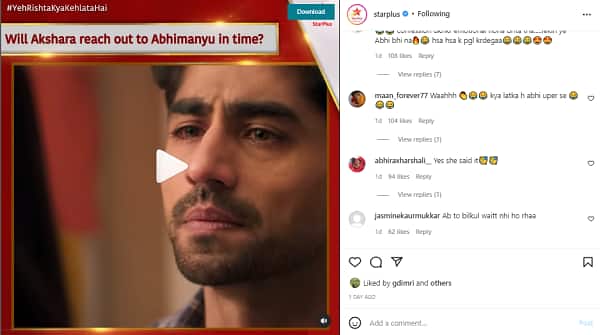 On a scale of 1 to 100, how excited are you for Abhimanyu's Spiderman entry or Betaal styled entry? Let us know by tweeting @bollywood_life.