Sonal Vengurlekar who is known or her stints Shashtri Sisters, Yeh Vaada Raha and others is under self-isolation. She revealed how her makeup man offered help to her when people who owed her lakhs of rupees have blocked her and aren't attending calls.

Sonal Vengurlekar who has worked in various TV shows is currently practicing self-isolation at home. The actress who has worked in various TV shows like Shashtri Sisters, Yeh Vaada Raha, Dev, Saam Daam Dand Bhed, and Teri Galiyan to name a few have been having a little financial crunch. At such time the actress got help from her makeup man. The actress took to her social handle to express gratitude. Also Read - Sasural Simar Ka actor Ashiesh Roy, Balika Vadhu director and others who struggled to make ends meet due to lockdown

"Today I was just sharing with my makeup man, that I don’t have enough money to survive for next month, because some producer hasn’t given my money, which is due from a long time. I was concerned about my makeup man that how he must be surviving in this situation, his wife is pregnant, and he has many expenses. The msg I got from him was totally unexpected. After reading his message I got tears in my eyes," she began her post. Also Read - Coronavirus pandemic: Sharad Malhotra, Shubhangi Atre and other TV celebs reveal their quarantine plans

She revealed how he offered help to her when people who owed her lakhs of rupees have blocked her and aren't attending calls. "He said “mam mere pass 15 k hai Abhi aapko chahiye ho to le lo, meri wife ke delivery ke waqt mujhe de dena “. I was wondering people who owe me lacs of rupees are not ready to pickup my calls & blocked me are not ready to give my hard earned money & my makeup man Pankaj Gupta who has always been like a family to me offering me money. Big thing is not the money he offered, big thing is he doesn’t have that much of money still he thought about me (waqt aa gaya hai ki so called Ameer log dil de bhi Ameer ho jaaye) Feeling sad for such people," Sonal Vengurlekar revealed in her post. Have a look at the snapshot of the post here: Also Read - Bigg Boss 13: Himanshi Khurana opens up on her conversation with Asim Riaz regarding his 'GF' controversy 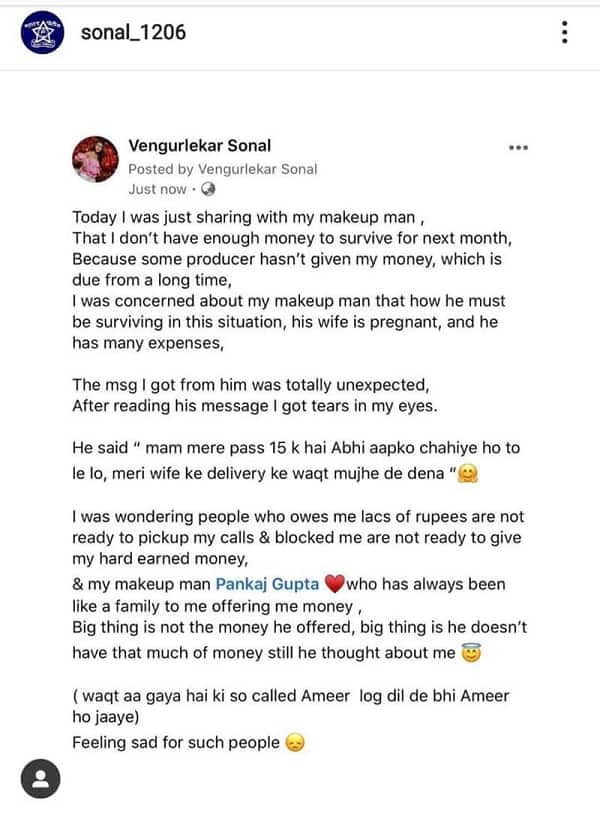