Shanaya Kapoor is very much fond of belly dancing and it is a known fact now. Well, those who follow the gorgeous beauty would know all about it. Have a dekko at her latest belly dancing video below:

Sanjay Kapoor and Maheep Kapor's daughter, Shanaya Kapoor has dropped another sizzling hot belly dance video. Though a practice session, Shanaya's moves are just perfect. She and her dance tutor, Sanjana Muthreja could be seen grooving to beats. Those who follow Shanaya Kapoor's Instagram account know that the Bollywood aspirant loves belly dancing. She is getting training from the same belly dance instructor who teaches Suhana Khan, her bestie, Shah Rukh Khan and Gauri Khan's daughter. Shanaya Kapoor is seen in cute brown bralet and beige track pants. Sans makeup, Shanaya Kapoor looks really beautiful. Shanaya's tutor heaped praises on her saying, "She makes it look so easy, With the most hardworking @shanayakapoor02." On the other hand, Shanaya wrote, "How we learn a choreography #practicesessions with the best!!! @sanjanamuthreja" Also Read - Trending TV News Today: Sonu Nigam spills the beans on quitting Indian Idol as a judge, Divyanka Tripathi refuses to do Bade Achhe Lagte Hain 2 and more

Amitabh Bachchan's granddaughter, Navya Nanda dropped a comment saying, "I got a stomach ache watching this." Have a dekko at it here: Also Read - Deepika Padukone, Alia Bhatt, Kareena Kapoor Khan and 7 more Bollywood beauties who left their education mid-way for a career in Bollywood 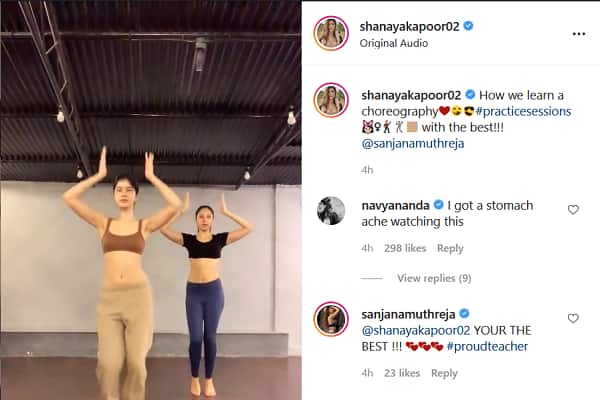 Also Read - BTS: Did you know V aka Kim Taehyung took inspiration from Johnny Depp and Billy Jeol for Butter?

Meanwhile, Shanaya is expected to make her Hindi film debut next year. What do you have to say about Shanaya's belly dancing skills? Let us know by tweeting @bollywood_life.