Mouni Roy steps out with hubby Suraj Nambiar for a date night; gets BRUTALLY trolled for her no-makeup look – watch

Mouni Roy was seen with Suraj Nambiar for a date night. The actress got brutally trolled by people on social media

Mouni Roy was seen last night outside a restaurant in Mumbai. The actress wore a mini bodycon dress in taupe colour. She teamed it with heels and a small bag. The actress had wiped off every trace of makeup. We guess that she decided to come straight for dinner after the shoot of DID Lil Masters. The actress did not have even a bit of makeup. Seeing her video, some people started making nasty comments. While one said that she looks like Kylie Jenner others did not pass such pleasant remarks. They commented about botox, plastic surgery and what not. This is not the first time that she has been trolled for looking different. Also Read - Mouni Roy locks lips with husband Suraj Nambiar on his birthday; shares cosy pictures from their celebration

Mouni Roy has often been trolled on her looks. The maximum noise was about a lip job. She never reacted harshly on those nasty comments about her. Also Read - Trending Hollywood News Today: Dhanush joins Ryan Gosling in The Gray Man sequel, Alec Bladwin brutally trolled and more 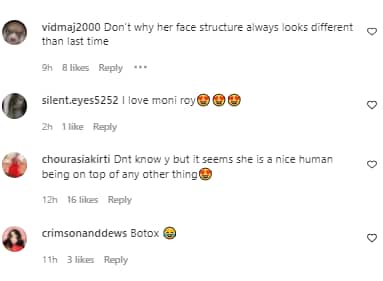 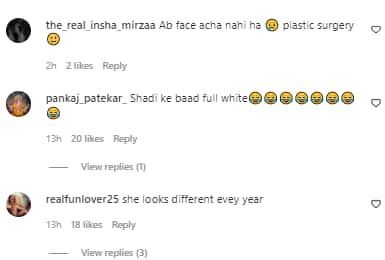 Mouni Roy got married to her beau Suraj Nambiar in January 2022. The nuptials happened in Goa with her friends like Arjun Bijlani, Aamna Sharif, Mandira Bedi, Aashka Goradia and others in attendance. He is an investment banker in Dubai. Suraj Nambiar is from a wealthy family of urban planners in Bengaluru. Mouni Roy will be seen next in Brahmastra. She plays a villain in the big budget sci-fi film with mythological backdrop. She is the daughter of Amitabh Bachchan in the film. Mouni Roy is seen as a reality show judge on Dance India Dance Lil Masters. Plus, she is doing many music videos. The film has Ranbir Kapoor and Alia Bhatt in the lead.