TV actress Sanjeeda Shaikh is one hottie! The actress loves to flaunt her hot bod and why not! You have it, you flaunt it! However, she got massively trolled for her latest reel. In the video, we see her showing off her sultry side on Samantha Ruth Prabhu's recent item number Oo Antava from Allu Arjun's Pushpa: The Rise. Wearing a black bralette, silver chains and hot pants, Sanjeeda Shaikh is setting the internet on fire. However, a few netizens trolled the actress and even dragged in her divorce with Aamir Ali. A netizen wrote, "Isko divorce k baad se kia hogaya hai." Also Read - Allu Arjun starrer Ala Vaikunthapurramuloo Hindi release called off to make way for Kartik Aaryan starrer Shehzada 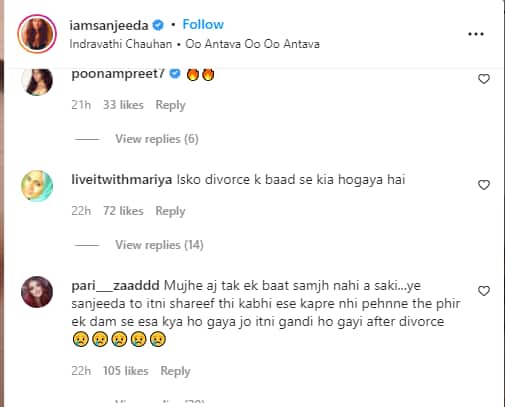