Koffee With Karan 7 will start streaming on Disney+ Hotstar today, and here's what Kangana Ranaut has to say about Karan Johar and the show. Read on to know more... 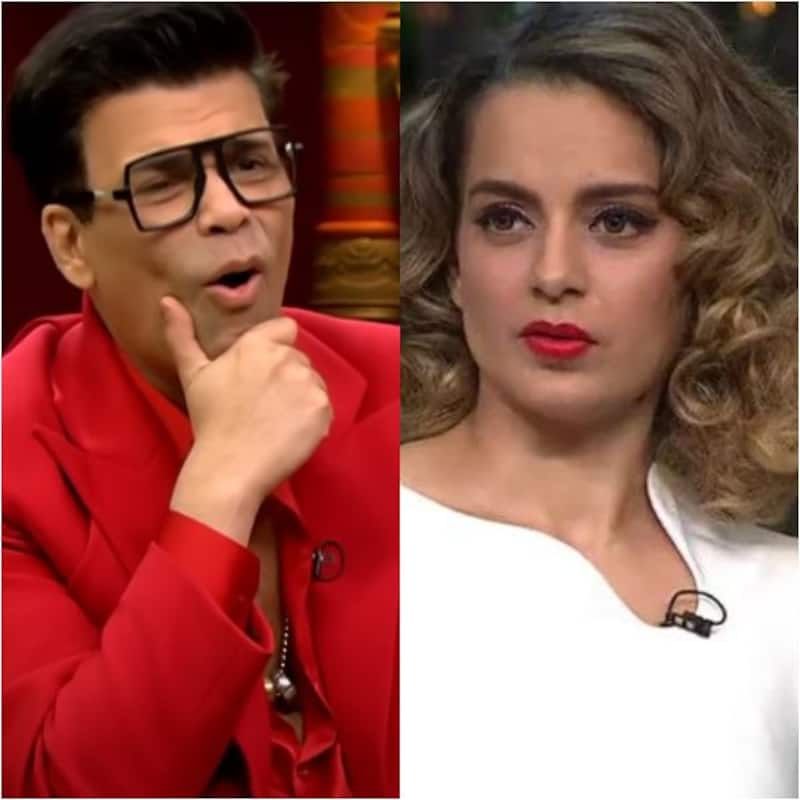 Karan Johar’s much-awaited chat show Koffee With Karan season 7 is all set to start streaming on Disney+ Hotstar today. Ranveer Singh and Alia Bhatt will be seen in the first episode of the show, and the promos have already grabbed everyone’s attention. Apart from Ranveer and Alia, celebrities like Sara Ali Khan, Janhvi Kapoor, Vijay Deverakonda, Ananya Panday, Akshay Kumar, Samantha Ruth Prabhu, and others will be seen on the show. Well, Koffee With Karan is known for the controversial statements that celebs make on it, and how can we forget the episode featuring Kangana Ranaut and Saif Ali Khan. Also Read - Raksha Bandhan: Women mob Akshay Kumar to tie rakhis as he visits artisans in Jaipur; emotional star says, 'Aapka pyaar apni kalai par...'

The Rangoon stars graced Koffee With Karan season 5, and during the rapid-fire round, Kangana called Karan a ‘movie mafia’ and ‘flag bearer’ of nepotism. It was said in a very light-hearted manner, but a debate about nepotism in Bollywood started after the episode. Also Read - Trending TV News Today: Nia Sharma-Paras Kalnawat's Jhalak Dikhhla Jaa 10 promos win hearts, Erica Fernandes reacts to trolling of her Viking look and more

Kangana Ranaut on Koffee With Karan 7

Now, as today Koffee With Karan season 7 premieres, Kangana took to Instagram to wish ‘good luck’ to Karan, but she also took a dig at him. The actress on her Insta story wrote, “Papa jo is promoting all famous coffee episode as it premieres on OTT today, good luck to papa jo… but what about this episode. Oh sorry!!! surgical strike, ghar mein ghusss ke mara than na, my episode is his most popular episode and after this he got banned on tv… Just like their filmfare awards.” 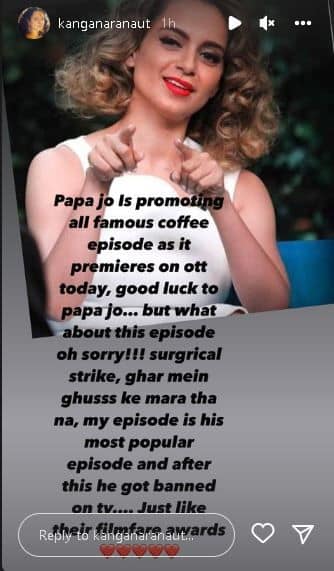 We wonder what Karan has to say about Kangana’s post. Meanwhile, fans of Alia and Ranveer can’t wait to watch the first episode of Koffee With Karan 7. The two actors, who were seen together in Gully Boy, will be once again seen on the big screen in Rocky Aur Rani Ki Prem Kahani which is directed by Karan Johar. The movie is slated to release in February next year.

Alright everyone, brace yourself as @RanveerOfficial , @aliaa08 and I dish out some steaming cups of entertainment in the very first episode of this sizzling hot new season! f#HotstarSpecials #KoffeeWithKaran S7. Catch the first episode on 7th July only on @DisneyPlusHS pic.twitter.com/pDgKLfvrxo