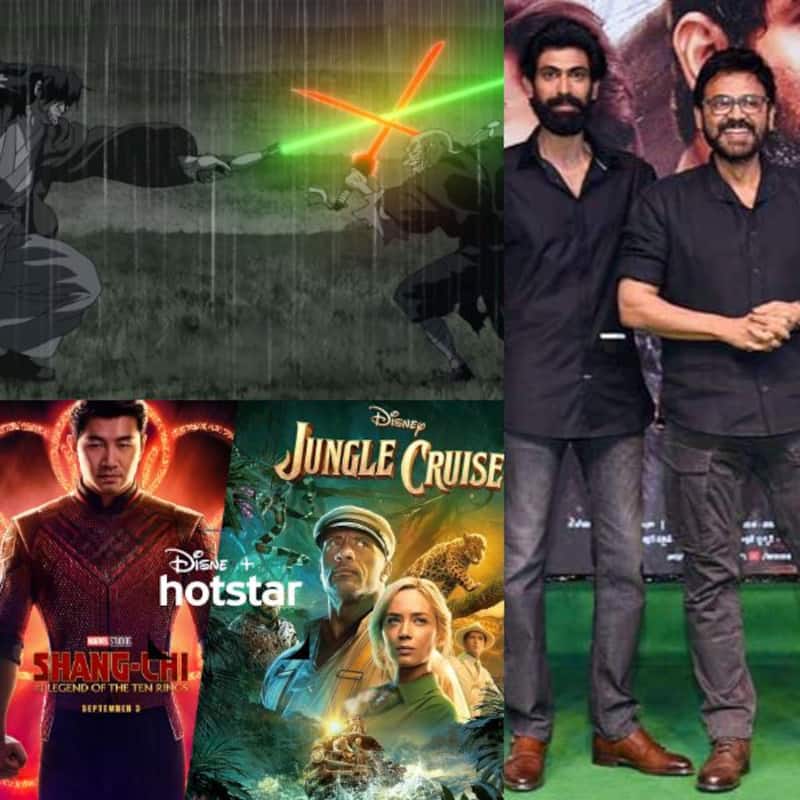 With the door being shut on another day, it's time to look back at the biggest newsmakers from the OTT space who've made it to the trending entertainment news today. From Star Wars Visions being truly visionary and Netflix announcing Venkatesh-Rana Daggubati's Rana Naidu to Shang Chi and Jungle Cruise web release dates, Sachin Tendulkar, Madhuri Dixit and Varun Dhawan joining ZEE5's Global Citizen Live World Broadcast, and the lyrical music video of Prithviraj Sukumaran's Bhramam, titled Munthiripoovo – here's all what grabbed headlines to make it to the trending OTT news today... Also Read - Anurag Kashyap against the pan-India bandwagon? Feels Bollywood heading towards disaster as it emulates South projects

So, without further ado, here are the entertainment newsmakers of 22nd September 2021:

Venkatesh and Rana Daggubati will be seen sharing screen space in Netflix’s upcoming crime web series, Rana Naidu. Produced by Locomotive Global Inc., the show is an official adaptation of the hit, award-winning Showtime series, Ray Donovan, and will commence shooting soon. The plot revolves around Rana Naidu, the go-to guy for everyone in Bollywood when they have a problem. The format rights are licensed by Viacom CBS Global Distribution Group. Karan Anshuman is the showrunner and the Director and joining him to co-direct is Suparn Verma.

Read the full story here: Rana Naidu - Uncle-nephew pair Venkatesh and Rana Daggubati come together for the Telugu adaptation of the crime-drama web series for Netflix

With Mumbai being added to the list of Global Citizen Live destinations, viewers will get to see their favourite Indian artists, including Amit Trivedi, Ajay-Atul, Badshah and Tanishk Bagchi perform live along with appearances by Sachin Tendulkar, Madhuri Dixit and Varun Dhawan who have also come on board amongst others to support the Global Citizen Live campaign. The festival will be broadcast on the television channels of ZEE and the audience can also catch the planet’s most concerned artists and greatest performers on ZEE’s digital entertainment platform, ZEE5, in India and across the globe.

Amazon Prime Video recently announced the release of Prithviraj Sukumaran's Bhramam. Directed by Ravi K Chandran, the film will drop exclusively on Amazon Prime on 7th October. Ahead of the film's launch, the streaming platform today released a lyrical music video titled Munthiripoovo. The video of this peppy and soulful track, starring Prithviraj and Raashi Khanna, has been composed and arranged by Jakes Bejoy, who has also lent his voice to the song along with Midhun Suresh. B K Harinarayanan has penned the lyrics. Bhramam also features Unni Mukundan, Sudheer Karamana and Mamtha Mohandas. It's the official Malayalam remake of Andhadhun.

The Walt Disney Company has huge plans for the Disney + Day on a global scale. Subscribers all over the world will be treated to new content across their brands like Disney, Pixar, Marvel, Star Wars, National Geographic and Star. The streaming premiere of Marvel Studios’ Shang-Chi and The Legend of The Ten Rings will take place on November 12. The much loved Jungle Cruise will also be available to all subscribers. Dopesick, an original web series, starring Michael Keaton, too, will be streamed across the globe.